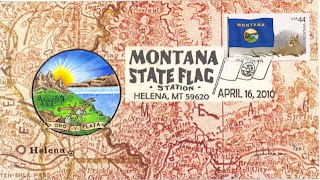 Last Friday the USPS put the fourth in a series of six Flags of Our Nation stamps on sale. Montana is among the states to get a stamp in this series, and the post office asked me to design a cancel for them. I was honored. I decided to combine my love of map envelopes (read that MAIL ART) with my cachet business, and I was really happy to get the opportunity to offer my subscribers a nice cover to add to their collections.

I used a territorial map of Montana to create the envelopes from archival #70 paper, and then utilize the image from the Great Seal and flag of Montana to produce these little pieces of art.

The history part of how the flag came to be goes back to the Spanish American War when a unit of the Montana National Guard carried this flag into battle - not as it appears today, but the seal and flag were developed from the unit flag itself. The seal reflects the heritage of this great state - a pick and shovel (mining), a plow (agriculture), the Great Falls of the Missouri (first recorded by Lewis & Clark in 1805), and the majestic mountains for which Montana was named. The words on the scroll, ORO -Y-PLATA , mean Gold and Silver.

Oh yes, and Beth Niquette over at The Best Hearts are Crunchy is hosting Postcard Friendship Friday, if you're interested in looking at more great 'mail art'!
Posted by MrCachet at 10:34 AM 20 comments: 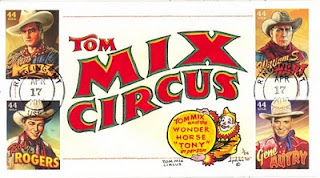 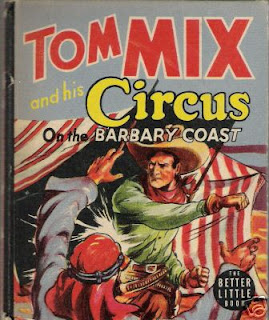 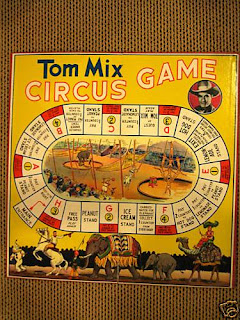 What have I been doing for the past month??? I have to feed my Old Paper habit by continuing to produce First Day Covers, and also I've been asked to design two First Day Cancels for the Postal Service within the past month as well. The cancel are a lot of fun, and I will post the one I produced for the Montana Flag stamp (which came out yesterday) for next week's Postcard Friendly Friday. But just so you know...

The USPS released its Cowboys of the Silver Screen issue on Saturday, and I deliberately avoided the more common themes for the art work. Not only that, but I also purchased and canceled the stamps in the little berg of Ringling, Montana, named for one of the Ringling Brothers who at one time not only had a rail spur built to accommodate the railroad cars for his traveling circus, but also he heavily invested in the cattle market and owned a great deal of property surrounding the town.

Tom Mix made numerous movies, but documenting them all is a difficult task at best, since most of them have long since deteriorated to the point that they are not viewable.

His Circus involvement is easily documented, and he worked for not only some rather large Wild West shows, but circus and rodeo performances were also a big thing with Tom. He had a Wild West show as early as 1909, but he did not have his own circus until 1935, when he purchased the Sam Dill Circus and renamed it. He employed 150, and kept 75 trucks on the road for 3 years.

After posting on Saturday, I received a nice email from a lady by the name of Marianne Dow. I don't know what she doesn't collect, but I know both of the images, the one of what appears to be a comic book cover and the other a board game, come from her personal collection.