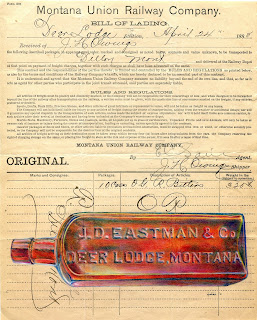 J. D. Eastman of Deer Lodge, Montana Territory, was granted a patent for Oregon Grape Root Bitters in 1886. He sold out to a fellow by the name of J. H. Owings in 1887, as I have  a piece of Owings letterhead dated April 18th of that year. A fascinating letterhead depicting an Oregon Grape leaf: 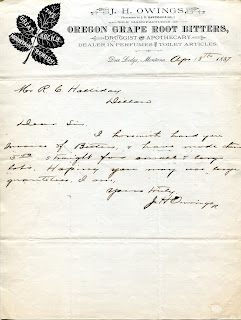 This is a commissioned piece by a patron who first purchased a National Biscuit Company piece of paper on which I pictured the Uneeda Biscuit Boy back in 2012.

Posted by MrCachet at 7:32 PM No comments: