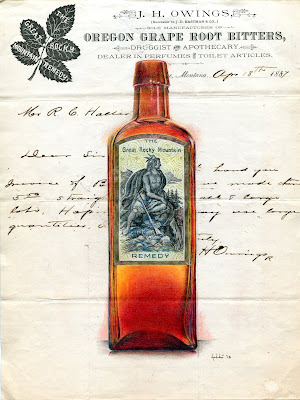 A year ago, I was chasing a bottle. The bottle I was chasing is a sought-after and very collectible bottle that Dr. J. D. Eastman had produced for an herbal remedy formula called Oregon Grape Root Bitters. When Owings purchased the business from Eastman, he also obtained all of the business paper. Included in the business was a very well done letterhead which included a paper label for his product, which went unused once he had the embossed bottles produced.

While attempting to locate a collector willing to give me a photograph of this bottle, I was told of the existence of an Eastman letterhead with the label. 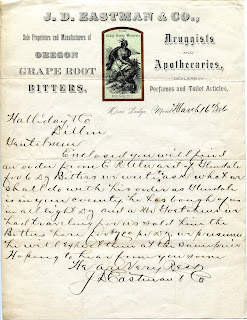 The bottle this label was applied to may or may not have been embossed, but once I saw this letterhead, I knew exactly what I needed to do to add a labeled bottle to the Owings letterhead. The embossed bottle was placed on a bill of lading, and I posted it here.
Posted by MrCachet at 7:06 AM No comments: