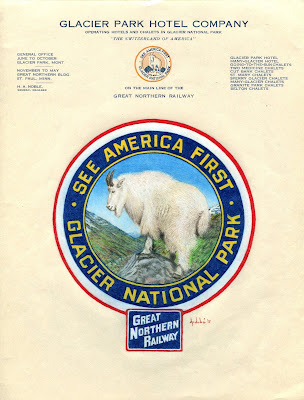 I purchased this piece of paper two years ago, and didn't bother examining it closely. The offset logo in the center of the letterhead bothered me, and there was a chip in the top edge. Like the title says, I've done Rocky more than once. In July of 2012 I did a tin sign. Last year I did Boxcar Rocky. Both of those sold. I like this one so much I just may do another, if I can find some more Glacier Park or Great Northern Railway paper.
Posted by MrCachet at 6:35 PM No comments: 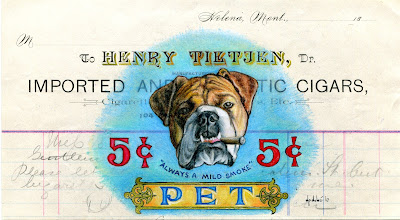 This is a commissioned piece from a long-time patron, who first purchased a piece of my art during the Western Heritage Artist's show and Sale six years ago. The name will be familiar to a number of artists that belong to the organization, as Beverly Tietjen was a founding member of the WHA.

By 1895, there were over 42,000 cigar companies in the U.S. Many, like Mr. Tietjen, sold various brands of cigars and tobacco products, but they also manufactured their own. Because of strict regulation of sales by the government, retail outlets could only purchase cigars by the box, and once the box was empty, they had to order a new box. The artwork is phenomenal, and the means by which it is produced is phenomenal as well. There is quite a collectible market for cigar labels - Charlie Russell had his own, and even promoted them in some of his art. 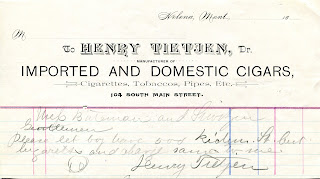 The above image is what the document looked like before I began to abuse it, somewhat. The erasures and line removes on most of this old paper that I encounter is excellent paper, and stands up to my abuse fairly well. There was a spindle hole on this one, but I'm really uncertain as to why. The pencil can be read, and he signed it in pencil as well, but I am having a hard time determining just exactly what he was seeking from Bateman & Switzer, to whom the note is addressed.

I could do cigar labels until the cows come home, but this one was a pleasure, as it came from my head, and the bulldog is from a brand called Bulldog. So - I copied it. When an original gets copied, it's a sign that the original was well done.
Posted by MrCachet at 1:52 PM No comments: