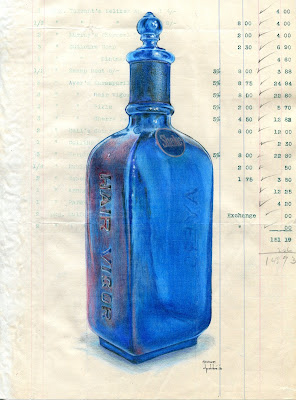 You may have realized by now that one of my favorite subjects is glass. This is no exception.

We'll start with a description of the document since it is too large (8" X 14") to fit on my flatbed scanner. I have a number of pieces of Montana Drug Company paper that I have used before, and I've put glass bottles on all of them. The first piece I did can be viewed HERE, and the second one is HERE. Both of them were patent medicines. This one is no different.

There are four of Ayer's products listed on this billhead, and they are Sarsaparilla, Hair Vigor, Pills, and Cherry Pectoral. I used my trusty research tool (Google) to look at the glass containers for all four of these products, and the Hair Vigor was by far the most eye-appealing. From there I had to either get a photograph taken or obtain permission to use an already existing photograph as a model. To that end, I contacted Mr. Don Fadely, who has put together a web site called Hair Raising Stories, which describes many patent medicines and their containers. It was constructed to primarily aid the collectors of the glass containers and the labeling. The bottles are collectible.

The following was taken directly from the product description on Mr. Fadely's web site:

(1) Dissolve 9 pounds of lead acetate in water; (2) add 9 pounds of cream of tartar, dissolved in water (as little water as will take it up); (3) wash this precipitate in water twice; (4) dissolve the precipitate in 30 pounds of solution of caustic soda (specific gravity 1.07); (5) add sufficient water to bring quantity to 13 pounds; (6) add 6 1/2 gallons of glycerine.

The description was a rewording from the patent. An exact date for the sale of Hair Vigor in this bottle is a bit vague, and although the original bottling is still to be found, I believe this bottle was headed to a barber shop, as many barber bottles are very beautiful with good reason. 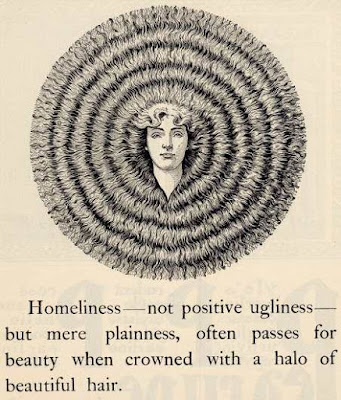 The above is an example of an Ayer's Hair Vigor advertisement from 1900. Almost psychedelic. Don't look at it for too long... 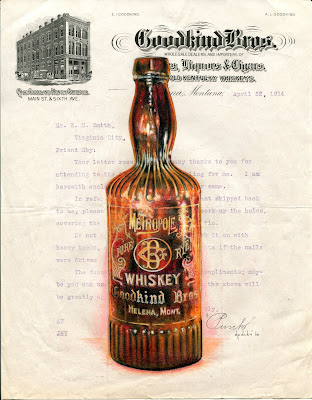 Brothers Abraham L. and Edward I. Goodkind, and Meyer and Charles Wise operated a wholesale wine, liquor, and cigar business in Helena, Montana, from 1890 or 1891 until 1896 when the Wise brothers left the business. The Goodkind brothers continued their operation until Edward died on May 11, 1916. The preceding is directly from the Montana Historical Society Research Center.

This is my first finished piece of 2016, and I intend to submit this piece for the Lobby Show at the Western Heritage Artist Show and Sale beginning on March 16, 2016, at the Holiday Inn in Great Falls, Montana.

It is a back bar bottle with fluted shoulders and base, and although I have not seen this particular bottle, I have seen a similar bottle belonging to one of my first patrons. I used a photograph as a model for this piece, and the image was borrowed from another patron and original owner of this bottle.

The letterhead is dated 22 April, 1914, and the letter concerns the shipment of whiskey barrels to be returned to Goodkind Brothers from a Mr. E. M. Smith. I am not certain how this letterhead was acquired, but I assume it came from ether the C. W. Rank or S. R. Buford establishment records in Virginia City.

The Goodkind Brothers building still stands at the corner of 6th Avenue and what is now known as Last Chance Gulch. When this letterhead was originally printed, the street was called Main Street, and was indeed THE main street of downtown Helena. The building is now the beginning of a two block long walking mall that extends South on the gulch to Broadway, which roughly parallels 6th Avenue East and West. 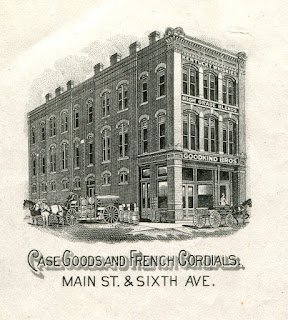 Urban Renewal frankly decimated downtown Helena, and eliminated some of the rich historical buildings. This one survives.