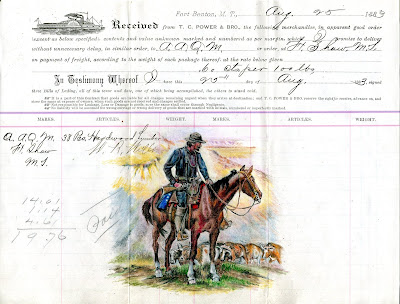 The possible names that I have and the sources for those names in this image are as follows: The Gilcrease Museum where the original painting resides cites a passage from the book Half Interest in a Silver Dollar: The Saga of Charles E. Conrad. On page 22 "The man in the painting is sitting on his horse as he watches the progress of the wagons up the grade. Art critics believe the man pictured is Ed Trainer, wagon boss for the I. G. Baker Company."

The most intriguing name that I found I can attribute to Ken Robison, historian at the Overholser Historical Research Center in Fort Benton. In a two part story for the River Press in 2012, Mr. Robison described a fellow by the name of James W. Brown who was a Civil War veteran, and in part one of the story, his military experiences, including the fact he was wounded three times is outlined. The second part of the story, and the one that I found tells of the most likely subject of the painting, although Charlie could very well have substituted the face of anyone for that of James Brown. The character that was portrayed may have been a combination of gear for the Diamond R, and a subject of Charlie's choice.


James W. Brown came west as a bull whacker in the Summer of 1866, driving a team of oxen and wagon from Nebraska to Salt Lake City. He loaded the wagon with freight for Helena in August, and arrived in Helena in September. Originally working for another business as wagon boss, he engaged with the original Diamond R, owned by John J Roe & Company under the business name Overland Express Company. I'm including an image of a way bill for the Diamond R below. 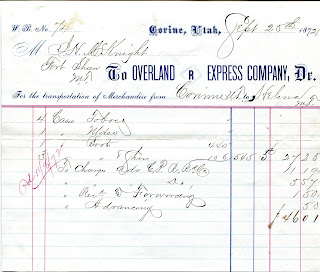 I've yet to decide what I'm going to put on this one, but it will involve the Diamond R, that's for certain.
Posted by MrCachet at 5:55 PM 2 comments:

A Quiet Day in Utica 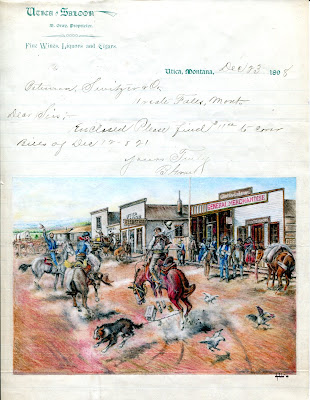 "A Quiet Day in Utica"
first titled "Tinning the Dog"

A fabulous piece of history here, which includes a number of recognizable individuals. The most important fellow is head and shoulders above the rest, and the gentleman whose sons commissioned Charlie to paint this piece for their father, Charles Lehman, or as Charlie called him "Charley". His name is on the sign above his business. A total of fourteen individuals are depicted, including Charlie himself, leaning against the rail just to the right of the Tinned Man's ride. Also, three chickens untold horses and one unhappy dog. The large tin, if anyone is curious, was for fish oil.
Posted by MrCachet at 4:43 PM No comments: