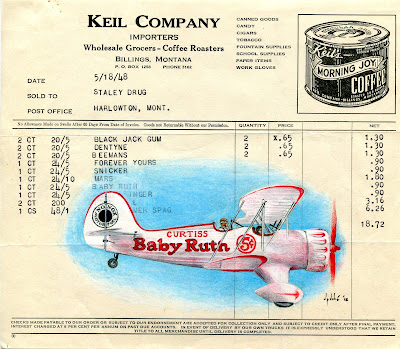 Back in August of 2010, I put up a post of a billhead which referred to a sale of Baby Ruth Candy Bars which I obtained from a Michael Popek of Forgotten Bookmarks via SusanE at This Old Paper. It was great fun to put together that post (and the image), primarily because I was to learn a great deal about the way that the candy was merchandised across the country.

Even more interesting than the Baby Ruth Flying Circus is the story of Paul Tibbits, who garnered a ride in Davis' Waco to serve as the bombadier for one of the Candy Drops in Florida in 1927.

Paul Tibbets was born in 1915 to Enola Gay and Paul Warfield Tibbets in Quincy, Illinois. In 1924, the Tibbets family moved to Florida. Paul was nine. On a warm summer day in 1927, barnstorming pilot Doug Davis, let twelve-year old Paul ride in his Waco 9 airplane and toss Baby Ruth candy bars to the crowds at Hialeah racetrack and Miami Beach. Tibbets always traced his interest in aviation to that day.

Do you recognize the name of Paul's mother?  On August 6th, 1945, Paul Tibbits flew the B-29 he named the Enola Gay over Hiroshima, Japan, and will be forever remembered in history books, as will his mother.

I've done the Curtiss Baby Ruth airplane twice before, and with this one I'll put the plane in the hanger. My art probably doesn't make you want to go buy a Baby Ruth, but you'll perhaps think of my art the next time you pay 75 cents for a nickel candy bar!
Posted by MrCachet at 9:34 PM No comments:

Messenger for the Palace 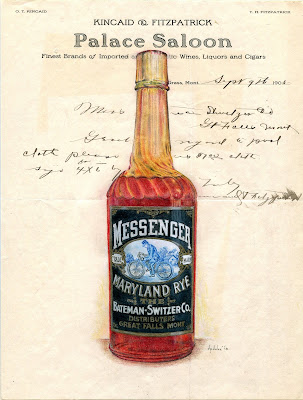 The third time will not be the charm for this bottle. While working on this one, I had a vision of a Russell label to match the cigar box pictured below. Might be a nice combination. 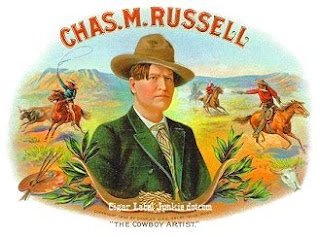 There's also a square top box label that is pretty close to the same design as pictured below. My thinking is I should make a Bateman & Switzer Whiskey label of my own. 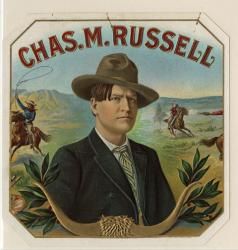 To me, either one of them is not really a very good likeness of Charlie. I can do better.
Posted by MrCachet at 4:57 PM No comments: