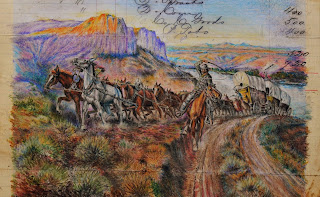 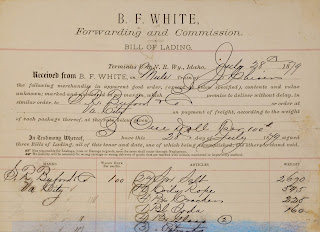 A Mule train of freight wagons from Terminus, (now Dillon), to Virginia City, Montana Territory, the freight being carried to Terminus by narrow gauge Utah & Northern Railroad from Corrine, Utah.

From the Beaverhead County Museum we copied the following: Richard Deacon resisted the railroad when an attempt was made to cross his ranch. To overcome this obstacle, a group of enterprising businessmen purchased the lands of Richard Deacon and gave the railroad company the right-of-way. It was a prompt and satisfactory manner of handling a difficult situation. It also led to the formation of a townsite company and the town of Dillon began its interesting history. This land was purchased Sept. 14, 1880, from Deacon, by a group of merchants headed by Howard Sebree, for the sum of $10,500. There were 480 acres in the piece of land purchased. A company was formed by L. J. Ruth, Sim Estes, L. C. Fyhrie, B. F. White, Charles Lefevre, Wilden Pinkham, E. M. Ratcliffe, Sebree, Ferris & Holt, George Smith & Co.

The Utah and Northern Railroad was the very first railroad into Montana, albeit it was Montana Territory and Montana would not be a state for another 10 years. The obstacle of right-of-way for the railroad was not the only obstruction - it was a narrow gauge railroad, the cars were small, as were the locomotives. Think, Monida pass. Terminus would have to have been at the Southern edge of the Deacon property, whose property became the business district of what is now Dillon.

The post office at Terminus was established in March of 1880. The name was changed to Dillon, in honor of Sydney Dillon, the president of the Union Pacific Railroad later
in 1880. The Union Pacific bought out the Utah & Northern and converted the entire line to Standard gauge, thus insuring that goods shipped by rail from back East would continue on to the lucrative markets in Montana Territory without delay. To this day, the Union Pacific owns the railbed, and leases it to Burlington Northern & Santa Fe.

The gentlemen who purchased the Deacon property may have jumped the gun, having business paper (like this piece) printed with 'city' name of Terminus, but in this case I'm happy they did. It makes for a very interesting story. 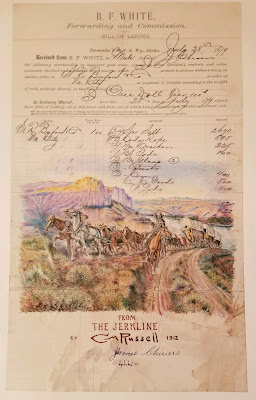 Posted by MrCachet at 9:35 AM No comments: