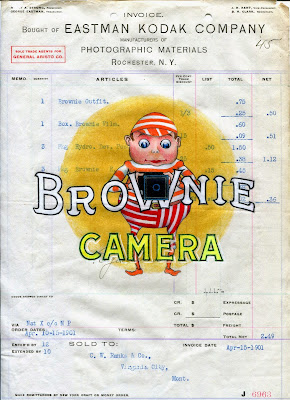 A very significant piece of old paper from the ledger of C. W. Rank & Company in Virginia City, Montana. Water stained on the edges, chipped on the upper edge, and toning all around. Am I happy I found it? Yes, yes I am.

As can be seen in the lower section, the invoice is dated April 15, 1901. This date is significant not because it's the date our income taxes come due (income tax would not be a burden for another twelve years), but because by October of 1901, the Brownie Number 1 camera would be discontinued. George Eastman, the founder of the Eastman Kodak Company, began selling the Brownie Number 1 in 1900 for the princely (not really) sum of ONE DOLLAR. Of course C. W. Rank got a discount of 33%, which brought his cost to only fifty cents, since his was a retail establishment. Probably a good move on C. W. Rank's part to turn around and sell this one camera, and order a few more.

For those of you interested in the history of the Brownie Camera, I urge you to visit a page devoted to all things Brownie Camera related, called The Brownie Camera Page. I decided a long time ago that if I ever found any Kodak paper that was of the right period for a Palmer Cox Brownie, I knew what was going to end up on it.

George Eastman was a marketing genius, and because this camera is considered to be the most significant camera in the history of cameras, he chose to team up with Palmer Cox. It was a good move. Children (and adults) at the turn of the century were well aware of the Brownies, and there was never a better way to encourage the sale of cameras to the common folk than Brownies.
Posted by MrCachet at 7:51 AM No comments:

The Irish Jig on a Pig 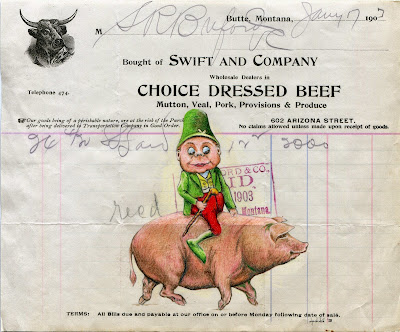 Hams. This Irish Brownie is hamming it up. A little history is in order, and for the record, I have several more pieces of this Swift & Company paper that will hopefully keep me high on the hog for awhile.

Simeon R. Buford drove an ox team to Virginia City, Montana Territory, in 1865 at the ripe old age of nineteen. He started a freight business on a route from Fort Benton to Virginia City. When the Union Pacific Railroad reached Corrine, Utah Territory, he began hauling freight from Corrine to Virginia City, as the railroad was a more reliable source of transportation that the steamboat.

In 1878 he opened a mercantile business in partnership with Henry Elling, and built the largest mercantile business in Montana in 1900. This billhead is for hams - $20.00 worth. Swift & Company had a Butte processing plant, and I'm assuming that the ham was transported to Virginia City by freight wagon.
Posted by MrCachet at 6:04 AM No comments: