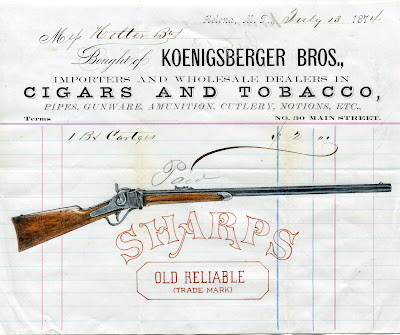 I will start with the subject of this piece first. I found this rifle on an auction site with plenty of close-up photographs and provenance. The site is Collectors Firearms, The serial number is pictured in one of the photographs as #C54634, one of three Model 1874 Sporting Rifles in .50 Caliber shipped from the factory in Hartford, Connecticut. The shipping date is listed as April 24, 1875, and was sent to a the sporting goods dealer Spies, Kissam & Company in New York City. The total cost of all three of these rifles, plus bullet molds and shipping crate was $92.94.

I could have chosen a different Sharps, perhaps one of their Buffalo Rifles, but Collectors Firearms supplied plenty of photographs of this one, and I decided to go with this one rather than one that perhaps would have been used here in Montana - because I LIKED IT.

Realizing that although this billhead was for cartridges and not firearms, I thought for awhile about doing a cartridge box. This was early enough (July 13, 1874) that I really couldn't find anything colorful enough in cartridge boxes to do this piece of paper the injustice of picturing a plain old box.

After a visit to the Montana Historical Society Research Center, I discovered exactly nothing about the Koenigsberger Brothers. I also did a web search for the brothers and found the following entries in the San Francisco Directory for 1867:

Although a bit cryptic, it does make mention of Sebastian in Helena in 1867. The key element to this entry is the fact that the brothers manufactured cigars. They would have been in business at 30 Main Street in Helena through at least July of 1874, for that is the date on the billhead.

Fly Paper for the Fly Fisherman 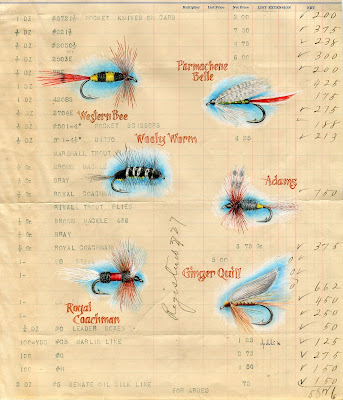 Another piece off of the drawing table and headed to the Footprints on the Trail, Western Heritage Artists Show and Sale. Opening on the 16th of March, I intend to leave this one unframed for the show. This piece is dated the 16th of February, 1904, sent from Marshall-Wells Hardware Company in Duluth, Minnesota, to C. W. Rank and Company in Virginia City, Montana. I've not had a bit of trouble finding new homes for the four previous pieces of 'fly paper' I've completed, and I don't think I'll have a problem finding a new home for this one either. 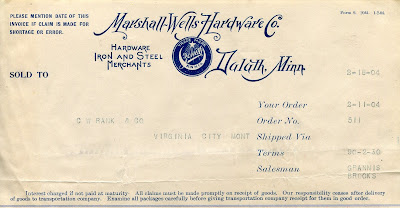 The above image is of the top of the piece which I thought it best to include in this post, as well as the dimensions: It is eight and one half inches wide by fourteen inches tall, and would display nicely in a frame.
Posted by MrCachet at 5:11 PM No comments: 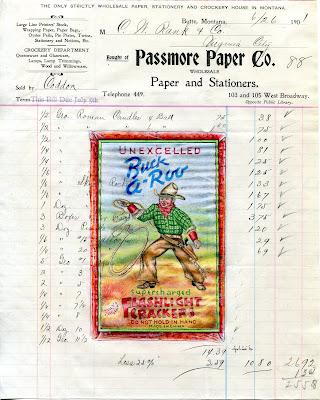 Another late June order for fireworks for C. W. Rank & Company of Virginia City, this one for the Fourth of July, 1901. It is also going to go to the Western Heritage Artists Show and Sale next month. I'm starting to get into the mood.
Posted by MrCachet at 5:50 AM No comments: