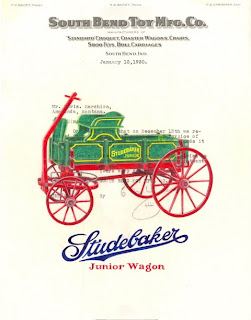 After a couple of months of devoting desk time to First Day Covers, I decided to do a piece of OLD PAPER ART, and this is the result of a week's worth of pencil-pushing.

A little bit about both of the companies involved with this nice piece of old paper:

The South Bend Toy Company was incorporated December 22, 1882, after being established in 1874. Frederick Badet, a grocery clerk, and John Teel, a woodworker, originally started the company, making croquet sets and other wooden toys. Croquet was that the time, the only acceptable game for women and children to play. About the turn of the century they began to build children's wagons and doll carriages.

The Studebaker Company was founded in 1852 and incorporated in 1868 under the the name of Studebaker Brothers Manufacturing Company. The company built wagons for farmers, miners and the military. Their factory was located in in South Bend, Indiana. Studebaker asked the South Bend Toy Company to build a number of small replicas of their full-sized wagons to place in dealer showrooms. The only problem they encountered was that the dealers couldn't keep them in the showroom, and Studebaker quickly realized that a smaller wagon for children would be a sales leader. South Bend produced the smaller wagons, and Studebaker sold them through their dealers. South Bend Toy also sold the wagons through the Sears & Roebuck catalog.

Included now in this post is a scan of the Sears & Roebuck catalog page from 1924 advertising the Studebaker Junior. The advertisement was provided to me by Gordon Westover, who builds upscale wagons and restores antique wagons, doing business on eBay as WagonMasterCoaster. If you have a moment and are interested, stop by his eBay store.

I have seen a number of real photo postcards picturing this wagon being pulled by a goat, and apparently photographers used the Studebaker Junior as a standard prop for children's photos.

I recently saw one of these wagons (not restored) at auction, and it sold for $3,300.