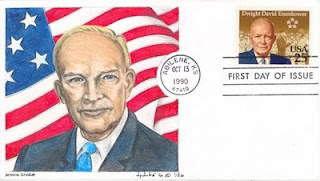 Forty years ago today I was where I didn't want to be. Twenty years ago when I created this cover, I was where I wanted to be, and just beginning to feel like I could become WHO I wanted to be. Following along with the theme for Postcard Friendly Friday, hosted by Beth Niquette at the Best Hearts are Crunchy, I decided to remember not only my flag, but also a man who symbolizes the greatness of our country under the worst of conditions. Be sure to stop by and see what others are posting for Postcard Friendly Friday.

For all those who gave their all,
Eternal Rest Grant unto them, O Lord,
And let Eternal Light shine upon them.
May they Rest in Peace. Amen.

Please take a moment to remember why we have a Memorial Day.
Posted by MrCachet at 7:02 AM 15 comments: 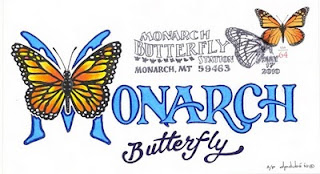 From Names on the Face of Montana by Roberta Carkeek Cheney - "Monarch (Cascade County) is an almost deserted mining town in the mountains at the junction where two gulches meet Belt Creek".

In 1889 when the settlement of Monarch was granted a post office with Charles Martin as postmaster, there were three mining claims being actively worked in the immediate vicinity with the names of 'King', 'Czar' and 'Emperor'. This may account for the name of the town, but the specifics are lost in the past. There was a railroad (Great Northern) which terminated in Monarch, and then it went further to the mining town of Niehart with passenger service on Monday, Wednesday and Saturday according to Opal Mayte, whom I spoke to for quite awhile this Monday past.

Opal was the postmaster in Monarch for thirty years, then her son became postmaster, at which time he fired his wife Grace as she had been a postal clerk for Opal previously.

Monarch literally came alive on Monday at about 11:30 when a brief ceremony was held for the issuance of the new Monarch Butterfly postage stamp. Without going into a lot of details on the marvelous job the current postmaster Kally Permann did to make the occasion so memorable, it was one of the nicest First Day Ceremonies I've ever had the pleasure of attending.

I designed the cancel for the postmaster, and she had prepared two hundred cacheted envelopes. She had ordered a thousand stamps, which amounted to fifty panes of twenty stamps to a pane. All of the stamps were gone by noon. The cacheted envelopes were also gone. They had mail requests from Europe as well as all over the United States already, and I'm certain that with the mention of the pictorial postmark in Linn's Stamp News the previous week, she'll be getting a lot more of them.

I am making the covers as I did with the Montana State Flag issue, so once I was through placing the stamps on the paper and canceling them, I was asked to sign my name under the cancel on the cacheted covers for those folks who purchased them when they bought the stamps, which meant I signed about two hundred covers as well.

If you are interested in what others may be doing for Postcard Friendly Friday, hop on over to The Best Hearts Are Crunchy to see any number of posters with the theme this week of the Power of One Voice!
Posted by MrCachet at 1:21 PM 17 comments: