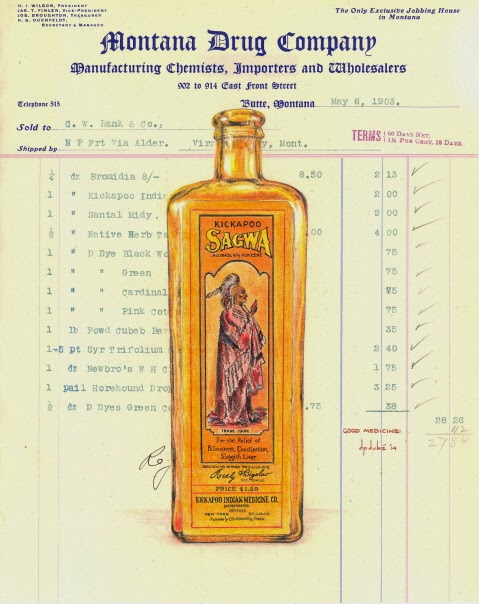 A billhead from the Montana Drug Company in Butte, Montana, dated the 6th of May, 1903. The second line item grabbed my eye immediately when I found this billhead. The recipient of this order was C. W. Rank & Company, in Virginia City, Montana. This business was the first 'drug store' in the territory and hence in the state, and is still in business in this restored historical landmark. Virginia City was not the site of the first gold strike in Montana, but it was one of the richest. The image of the bottle is from a photograph by Elaine Selene, and I found it by doing a Google search for Kickapoo Medicine. "For the Relief of Biliousness, Constipation, Sluggish Liver". I have some serious questions about the cure of sluggish liver, since the alcohol content is 9 and 1/2 percent. This should probably be classified as Snake Oil, but we have a hung jury on that one. This piece of paper will go with me to Great Falls, Montana, for the Western Heritage Artist Show and Sale in March
Posted by MrCachet at 5:29 PM No comments: 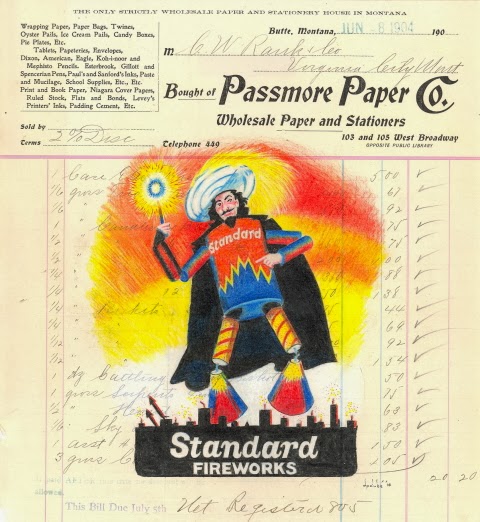 An order for Fireworks, including Electric Torpedos, Triangles, 4 Ball Roman Candles, Rockets, Serpents, Hornets, Sky Larks and assorted Crackers. From a paper company in Butte, Montana, to C. W. Rank & Company in Virginia City. Up until the turn of the Century, the Chinese had pretty much cornered the market on fireworks. Then India got involved. The oldest Indian fireworks company is Standard, and they are still in business. This is another piece I will be taking to the Western Heritage Artists Show, and if you're interested, we're also on Facebook!
Posted by MrCachet at 5:56 AM No comments:

This is a veritable treasure as history goes. The particulars are as follows: Dated the 16th of June, 1881, Montana would not be a state for another eight years. It is a bill of lading addressed to J. H. McKnight who had the trading post at Fort Shaw, West of what is now Great Falls on the Sun River. It was one of three sister steamboats built specifically to haul freight from St. Louis, Missouri, to Fort Benton, Montana Territory. The three sisters boats were the Montana, the Dacotah and the Wyoming.Of those three boats, the Dacotah hauled the greatest tonnage of freight to Fort Benton, and did that on its second trip of the year in 1881 arriving at Fort Benton on the 4th of July.

The Dacotah was actually the 6th boat to arrive at the levee, and the date indicated on this way bill is not the day that it arrived, but rather the day the freight was unloaded. This boat actually belonged to the Coulson brothers, and was not a boat which belonged to T. C. Powers. My assumption is that some of the freight belonging to Powers was put on the landing at Coal Banks, and was then transported to Fort Benton on the Dacotah, thus explaining the reason why this is a Power way bill rather than a Coulson way bill.

Regardless of who this boat belonged to, this image was taken from the only extant photograph of the Dacotah.
Posted by MrCachet at 10:30 AM No comments: