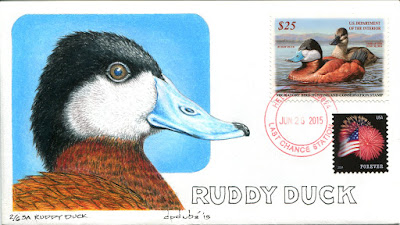 This is my Federal Duck cover for the 2015 Federal Duck stamp. The cost of the stamp went from $15 to $25 this year, but that didn't deter me. It is also the 25th Duck stamp issue I've done.

For a number of years now, the USFS has provided two different formats for the Duck stamp, both lick-and-stick and self-adhesive. I ordered the number that I needed in early June, and they were waiting for me at the Last Chance Station post office on June 26th, which was the earliest I could have them and was the First Day they were available nationwide. An error in filling my order presented me with a wild sight when I opened my package: Instead of sending me nine of the lick-and-stick stamps, the USPS sent me NINE sheets, each sheet containing twenty stamps. In other words, I had $4,500 worth of stamps instead of $225. I'd never seen so many Duck Stamps in one place at one time.
Posted by MrCachet at 1:21 PM 2 comments: 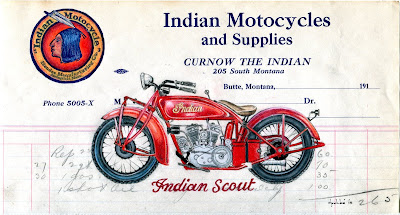 I used an image of a 1928 Indian Scout from a full page ad for the Indian Motocycle Company in Springfield, Massachusetts, as a model for this piece of billhead. It is the third piece that I have done on paper from Curnow the Indian, In Butte, Montana.

Michael Curnow opened a bicycle shop in Butte, Montana, at 205 South Montana Street in late 1908. I know that because the 1908 Polk's City Directory for Butte has no listing for him, whereas the 1909 directory does have a single line listing for him. In 1911 he became the Indian Motocycle dealer, and by 1913 he must have had a fairly decent business because he purchased a quarter page advertisement in the directory. I would dearly love to find a photograph of him, but so far I've come up empty.

This piece was done as a commission, so it is headed for its new home as soon as that can be arranged. If you look at the labels on the right side of my home page for Old Paper Art, you will see a label for Indian. There are now ten Indian Motocycle related posts.

UPDATE: Marianne Dow just posted a PHOTOGRAPH of Curnow which she found in Motorcycle Illustrated Magazine, so I'm posting the link to the photograph right here.
Posted by MrCachet at 1:26 PM 2 comments: