Bill of Lading
for Jas. E. Booge & Co.,
From the collection of Lewis Brackman 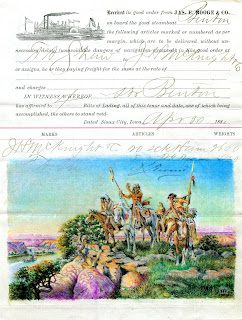 From the Sioux City Courier: In 1858, James Booge arrives in Sioux City. After buying a steamboat's water-logged load of wheat, he feeds the grain to a herd of hogs, butchers the animals and sells the meat to local butcher shops and the U. S. Army.

He went on to put into operation one of the largest meat packing plants in the United States at the time. In late April of 1881, Booge ships 20 sacked hams and 5 sides of bacon to J. H. McKnight, the Indian Trader at Fort Shaw, Montana Territory. It was carried by the Benton to Fort Benton, and arrived at Fort Benton on the 30th of May, or the 24th of June. One way or the the other, the pork was delivered.

Russell painted this little gem (16" X 25") in 1918, following more than one trip to New York where he was exposed to the color palettes of several well-known Eastern artists including Maxfield Parrish and Philip Goodwyn. Both of these artists were skilled in using vibrant colors and their compositions were constructed for maximum impact. Russell's fireboat would have done just fine for my version, but since the Indians had seen steamboats on the Missouri at least 30 years before the arrival of the Benton in 1881, I chose to put the Benton on this piece of steamboat history.
Posted by MrCachet at 9:18 PM No comments:

Buffalo Robes No. 3, THE END 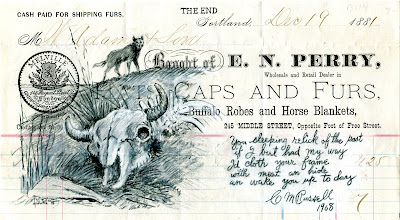 A poem and illustration by
C. M. Russell

By 1881 when this billhead was completed, the Buffalo had all but disappeared with few exceptions. Charlie Russell arrived in Montana Territory in 1880, and perhaps did see a few small herds on the plains between the Yellowstone River and the Missouri.

When Buffalo Nos. 1, 2 and 3 are matted and framed, I will publish the completed piece. This is for a patron who brought this project to me at the Western Heritage Artists Footprints on the Trail Show at the Holiday Inn this past March.
Posted by MrCachet at 6:16 AM No comments: 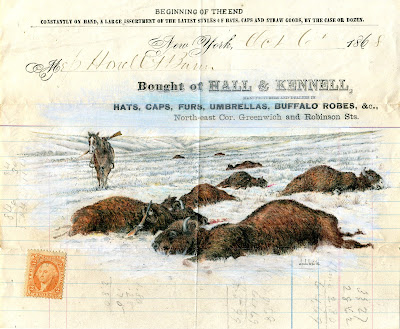 Killing of Cows and Spikes
Image is from a photograph by L. A. Huffman
taken the Winter of 1881 in Central Montana.

BEGINNING OF THE END

The patron who commissioned these pieces also chose the titles - up front, based on the date of the paper. Huffman took a series of seven photographs of a buffalo hunt in the Winter of 1881, somewhere between the Yellowstone and the Missouri Rivers North of Miles City. The two hunters were staying in a hut they constructed of long posts and buffalo hides that bridged a small coulee. Huffman produced stereoviews from several of the photographs, and this was one of them. Later, he also used this as a sepia tone postcard, and had retouched it.

Huffman also included text on the reverse of the postcard which indicated there were nine animals at this particular site. There were only eight that I could see, but perhaps one was out of this particular view. Huffman used a new camera he had acquired, and although this one appears to be taken from a tripod, several of the photos were taken from the saddle. Tripod or saddle, they are spectacular photographs in more ways than the obvious.
Posted by MrCachet at 6:10 AM No comments: