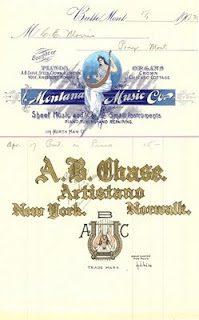 I finished this piece and posted it a couple of months back. I was initially happy after discovering I could still gild, but I was using size meant for imitation gold, and a metal base coat which was designed to help you see where you were putting the size. For the weekend artist I suppose the stuff is acceptable and the only reason I purchased it was because it was the only thing I could get locally. Not only that, but the base coat required a solvent cleanup, and it ruined an expensive sable sword brush of the tiny variety - about a dozen hairs - that I'd had for well over 40 years. I was disgusted. That was about the time I met up with Abraham Lincoln on the web, and I asked if he was the very same person I'd purchased a gold size product from at least twenty years ago.

My renewed interest in gilding and calligraphy to incorporate in my old paper art has also led to his revelation of past mail art which he has shared over time with me via his blog. Abe and his family had made a business of selling useful products for the calligrapher, but had moved on to other pursuits including some great photography which he now pursues with a passion.

I recently purchased a product called PVA - it is an all-in-one adhesive that accepts gild using the old method of illumination without the drawbacks of LEAD-based gesso products. Once the PVA is dry (it dries clear) you activate it by breathing on it. I use a paper straw, as the paper absorbs some of the inherent moisture that might otherwise fall on your paper (bad) if you used a plastic straw. I'm really happy with the 'pillow' I'm getting with it. I regilded the A. B. Chase portion of this, and I can tell distinctly that I'm not only getting a good raise, but luster from the burnish is also brighter.

For anyone interested in pursuing the use of REAL gold leaf in their art work, and they want a high luster and raised images, the product name is PVA, and it's sold on the web by a company called LINECO, Books By Hand You might find other useful products if you're into journalling, or scrapbooking, or anything paper related.
Posted by MrCachet at 5:48 AM 7 comments: 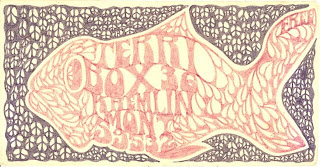 This is another of those covers I sent to my wife while I was in South Vietnam in 1969-70. It shouldn't have made it, since there's no return address on it, and it doesn't follow the rules for the use of the Free Franking privilege.

Marie is doing a hat thing and stinky cheese, and all I could find was some old fish.
Posted by MrCachet at 3:59 AM 13 comments:

The Holdup left the building 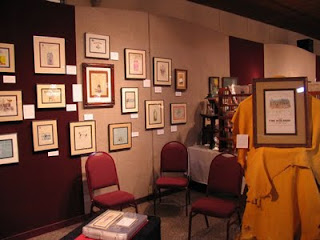 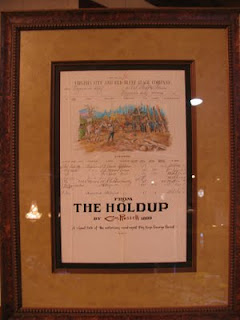 We did an antique show this weekend. One of my subscribers suggested that I let folks see it that already have a common interest in history, and he certainly wasn't far off the trail. We were fortunate to get a booth in a venue that had walls where we could hang my work. Instead of a four by eight foot table for a booth, we used a smaller table that I could put my portfolio on toward the front of the space. We added chairs, and draped an easel with several elk hides, and put my largest piece on the easel. My wife added a vase of flowers on the floor under the framed art, and next time we'll put them on a small and tall end table. It allowed potential buyers to get up close to my art work so that they could examine it closely. Many of those that we spoke to were convinced there was a trick to it, or that the images were originally part of the document. If they asked questions, it gave us the chance to do our part to correct wrong perceptions.

Saturday afternoon we were approached by a couple who are Charlie Russell fans. They liked "The Holdup", and promptly purchased it. They also agreed to leave it hang until the show was over. It was an eye-catcher, and everyone who stopped to look at what I had on display spent time looking at this one in particular. Photos don't do it justice. 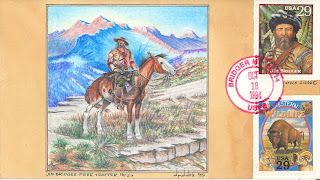 I'm hooked on horses this week, and I'm going to enter a Festival of Postcards, sponsored by A Canadian Family with a lot of other postcard folks who have images of animals that walk on four legs! I'm hoping to include my Big Top Tiger in the mix, as it was one of my favorite covers to do - Stamps flown in from Rochester, New York, then an eighty mile drive to the little town of Ringling, Montana, to get them canceled on the First Day of Issue. This issue featuring Jim Bridger was no different. We drove to Cody, Wyoming, to purchase the Legends of the West sheet of stamps, canceling Buffalo Bill and Annie Oakley in Cody, then back to Bridger, Montana, to cancel the Jim Bridger and Western Wildlife stamp. It was an excellent adventure!

Marie Reed at Vintage Verve is just plain CHEESY this week, so if you'd like to see what others are contributing to Friendship Friday, pay her a visit. I've already been there with the horse I rode in on!
Posted by MrCachet at 2:24 PM 21 comments: 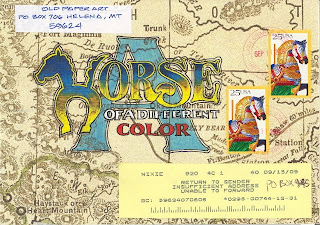 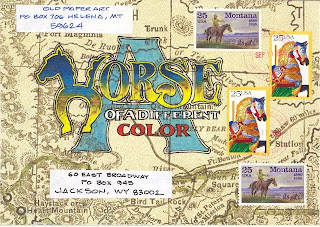 What did I find in my PO Box this AM??? What do you know. Postal employees in Jackson Hole can't deliver to a street address? Who knew. Sooooo - I get to put more stamps on it and try this again. It was me that wrote that box number on the label, but I had to do some searching to find it.

I will not be deterred.
Posted by MrCachet at 9:29 AM 6 comments:

It Fills The Bill --- Literally 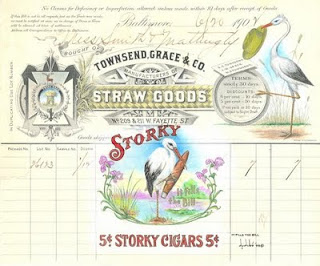 This is another piece of old paper like the two Geo. Miller pieces I picked up from Mary Patterson, although this piece came from Stuart MacKenzie in Chinook, Montana. It has a similar back story. I had visited Stuart's shop twice looking for old paper, and while there several months ago, he brought me this piece and said "You should be able to do something with this one". I rejected it immediately as too ornate and fancy for me. Before I left that day, Stuart said "How can you beat this piece of paper? It has everything you need on it. Couldn't you put a straw hat on this"? I once again gave it a rejection.

I no sooner got home from that trip and I was perusing the Cigar Label Junkie site, and LO! What to my wandering eyes did appear, but a stork with a seegar in its bill! Not only that, but five minutes later I found another label with a Jolly Good Fellow wearing a straw boater.

A couple of weeks ago, I was at Stuart's again, and this paper was at the top of my list. So there you have it. I think I'm going to have to stop looking so hard for old paper and let the stork deliver it from now on...

And, yes - I enhanced the vignette a little bit.
Posted by MrCachet at 10:46 AM 4 comments: 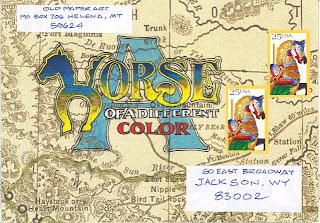 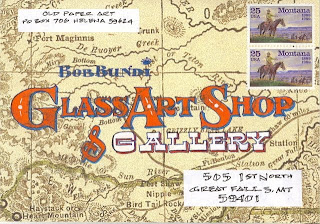 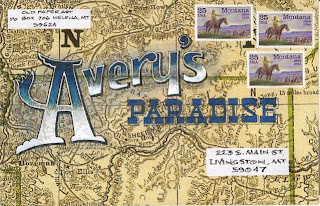 I got some news last night about a Gallery in Jackson, Wyoming, that might possibly be interested enough to let me walk in the door and show 'em what I got. It's worth a written inquiry, anyway. So - I'm off to the Post Office to show them the Horse I rode in on.

And... I heard from a gentleman in Great Falls that Mr. Bob Bundi at the Glass Art Shop & Gallery might also be good enough to let me do a walk-in Show & Tell. So - I threw this one at the Pony Express rider this AM. I can't strike out forever.

Last but not least, I got one more recommendation today about Avery's Paradise. Hmmmm.
Posted by MrCachet at 2:03 PM 15 comments: 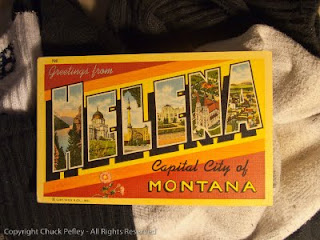 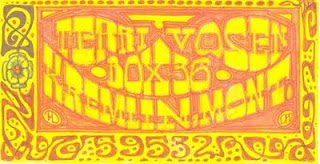 Okay. So I hope this works... My brother-in-law rode a scooter to see me. He's been blogging and scooting his way across Canada and into Montana. Several days ago, I asked a question: Where are your dirty socks? Sixteen hundred miles and eight days into this trip, and he tells me today he washed his socks yesterday. I told him he was lucky, cuz he'd not be setting a single wee little piggie inside my house with dirty socks. We documented his presence with a Teich LARGE letter postcard perched atop his dirty socks. I'm such a good friend...

And - I'm throwing in a Freebie that should have never reached its destination - but did. I now interrupt this program to show Chuck how to use the washing machine. Check out Vintage Verve for more good Friendly Postcards!
Posted by MrCachet at 8:13 PM 7 comments: 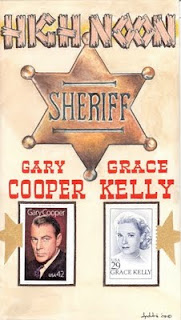 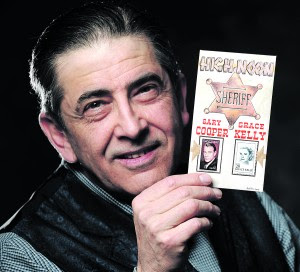 Well, it ain't the Police Blotter or the Official Court Record, but I have to tell you I got some really GOOD INK on Sunday in the Billings Gazette Sunday Magazine. Donna Healy wrote the article and James Woodcock took the photographs, and - I'm flattered.

If the article results in even one person getting the urge to put something on an envelope other than a stamp, I'll be happy. I'm beginning to think that we're losing the urge to create correspondence, and I don't mean the kind that ends up in the Dead Letter bin at the Post Office. We've created too many Electronic Easy Chairs if you get my drift. Cell phones and handheld electronic devices have definitely changed the way we communicate, and although that isn't necessarily a bad thing, I believe that the written word shouldn't be relegated to an album just yet. There is something very magical about getting an envelope in the mail that has your name on it. Try it. Even a doodle will do.
Posted by MrCachet at 4:13 AM 7 comments: 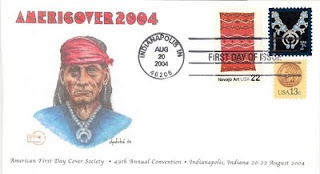 Marie at Vintage Postcards is back in the Postcard Friendship Friday game, and since she posted an American Food related card, I decided to post a Native American related cover. I was asked to create this cover for the American First Day Cover Society annual convention in 2004. The USPS usually has a First Day Ceremony for a new postage stamp during the convention, and this was no exception. Since the stamp did not meet the requirements for the First Class postage rate, they made up the rate with Native American related postage, which I think was a splendid idea. I especially liked the little tiny thing that you can barely read.
Posted by MrCachet at 7:19 PM 8 comments: