This one opened the Ball PFF #26 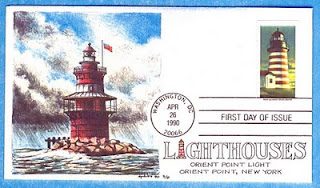 In 1990 I was working for Montana's Fish, Wildlife & Parks agency. There was a high volume of mail coming into the mail room in early April as nonresidents and residents alike submitted their applications for special permits to hunt big game.

One morning a fellow employee brought me an envelope with THIS stamp on it, and asked me if I could tell her what was wrong with it. I immediately spotted the lack of a cancel, and also the lack of any lettering or numbers on the stamp. I told her that yes, I knew what was wrong with it. She allowed me to take the name, address & phone number off of the application, and I went about the task of contacting the person who had put this error stamp on the envelope.

To make a rather long story short, the wife purchased the booklet of stamps and mailed the application for her husband, so when it came time to ask about purchasing the rest of the stamps from the booklet, I had to bargain with her - which I did. I purchased the balance of the booklet for $450, and also threw in one of these covers for her to keep. She accepted my offer.

I created a total of nine of these covers and sent them to Kansas City to get them canceled with the First Day of Issue cancellation. I sold ALL of them. In other words, I have none of them left. I also gave a dozen roses and $50 to the young lady who found the error stamp to begin with, and she thought that was more than the greatest thing she'd ever heard of - paying so much money for simple postage stamps.
And for those of you interested in more mail art, either on envelopes or cards, make sure you visit The Best Hearts Are Crunchy for more 'Eye Candy'!
Posted by MrCachet at 6:45 AM 16 comments: 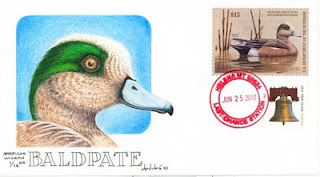 I know I'm late, but I'm tossing this one in here because it's a bird and although I didn't hear it on the radio, if it looks like a Duck - it is.

This is the first of twenty-two of these American Wigeons that I have to do, making them look all the same as best that I can. I like doing the ducks, and this is my twentieth issue of the Waterfowl stamps that I've done. In order to make them 'First Day' covers, I needed to get the stamps (at $15 a piece), affix a regular First Class stamp, and cancel them - neatly.

I was awarded Honorable Mention in the Duck category of the American First Day Cover Society's annual Cachetmaker's Contest for 2009. I did a 'portrait' of the Longtail duck, and this award is the eighth time I've received an award since 1990 in the Duck category.

Visit Beth at The Best Hearts Are Crunchy for more sounds and images for Postcard Friendly Friday!
Posted by MrCachet at 8:31 AM 11 comments: 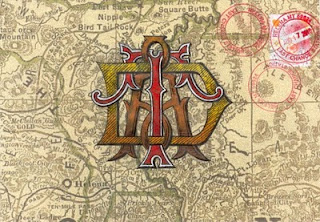 Yesterday was my wife's Birthday, so I created a card for her, and of course an envelope to put it in. It's her monogram. You should be able to read it, although I probably ignored all the rules for creating one.

I took it to the Post Office and asked for hand-back service, meaning I didn't have to toss it in the outgoing mail slot, I just got it back after the clerk canceled it. No mailing labels necessary. The third time was a charm as far as getting a date on it. For some reason, the dates are not showing up on some of the devices no matter how hard the clerk stamps it. Maybe some of you Stamper people have a good solution for that. 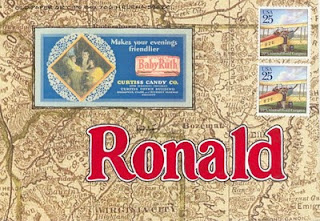 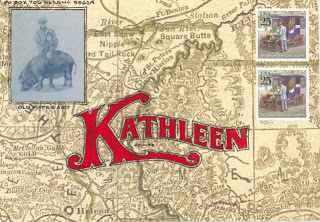 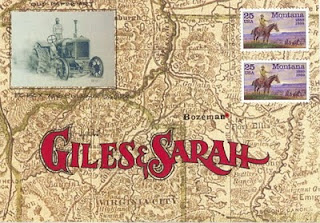 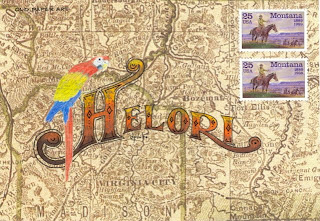 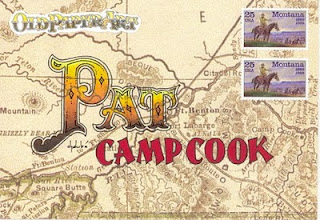 Rather than pick some of my more conventional 'envelope art' for this edition of PFF, I'm going to let you see the Thank You notes that went out after our successful trip to Bozeman, Montana, for the Little Bear Antique Show, held on the same weekend as the Sweet Pea Festival. Artists set up their booths in Lindley Park, and although I consider myself an artist, I believe my work is more attractive to those interested in all things VINTAGE.

I did not include the mailing address labels for any of them, as some of these folks wouldn't want their mailing address available in this venue. The last one, for Pat, is because she was a very gracious hostess who invited us to spend Saturday evening with them and share her table and some wonderful conversation with those of us who have an enduring interest in Old Paper.

If you are interested in more postcard images for Postcard Friendly Friday, please visit Best Hearts are Crunchy, as you'll enjoy a number of other images from old to new which have gone through the mail. Since today is Southpaw Day, I think I fit right in!
Posted by MrCachet at 12:56 PM 11 comments: 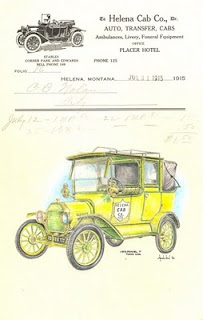 Research, research, research. Helena had a cab company very early, but for the early years, no records exist. I'm assuming that they used horse-drawn carriages for their upscale passengers, but I can't tell you for certain of that. I have seen many real photo cards and photographs of early Helena, and they did have cabs such as the Model T depicted on the billhead, but what I was looking for was something a little bit more snappy than what Mr. Ford offered.

I browsed Google images for several days, and finally found a photograph of a 1915 Model T Town Car, which I've rendered on this billhead. The sign on the door is 'right'. The license plate - 'right'. The only problem I had was that I couldn't locate an image of a Helena Cab of that vintage, so I used my Artistic License.

I visited the Montana Historical Society and found the archived records for vehicle registration and ownership, and began narrowing my search to locating a proper plate number for a Helena Cab in 1915. What you see is the result of my effort.

Plates were assigned as they were registered with the Secretary of State, but the records are in bound volumes, meaning I had to search line by line for an entry for 1915 for Helena. I had no idea there were over 12,000 vehicles registered in Montana in 1915, and that they also registered motorcycles.

NP is for Northern Pacific, GN is for Great Northern, and both railroads had terminals here in Helena. So, Mr. Nolan paid $1.50 for three trips by cab to the stations.

Any business with an office in the Placer Hotel deserved to own a cab like this one.
Posted by MrCachet at 3:32 PM 5 comments: