They're on their WAY 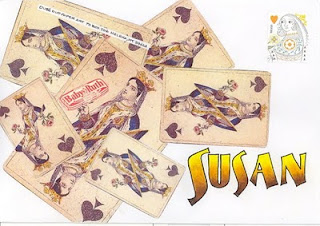 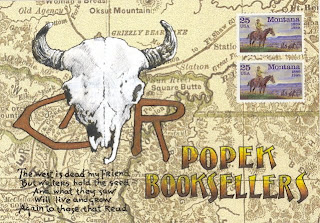 Back in mid-December, Susan - of This Old Paper welcomed me to their little community of links, and what a welcome it was. She 'discovered' a billhead for Baby Ruth and Butterfingers (by the box) on another site that I also follow called Forgotten Bookmarks. The billhead had been used for a bookmark, so I contacted Forgotten Bookmarks about obtaining the paper to use for my art, just as Susan suggested. The answer was YES, he still had it and would send it to me.

As a big THANK YOU to both of them for playing my game, I sent notes to both. I haven't decided YET what kind of Baby Ruth advertising I'm going to use on the billhead, but rest assured, when I do complete it, I'll be posting it here, linking to both of their fabulous sites, and framing the results for some other chocolate lover to hang on their wall.

By way of explanation, I've left the ground addresses off of the images. I use removable labels on my mail art now so that the recipients can have the envelopes to do with as they will, and I can post the images without revealing any addresses that are better left unrevealed.

My sisters Penny & Judy gave me a wonderful book of illustrated letters called "Your Friend, C. M. Russell". With the book came a bookmark that gave the history of Charlies use of the buffalo skull as part of every piece of art that he signed after 1906. The verse on the bottom was penned by Charlie in 1917, as a sort-of tribute to wordsmiths (he wasn't bad at telling a story with a pen either) whom he felt certain would tell the story of the West as he did with his brush.

I sent the bookmark to Forgotten Bookmarks as a bonus to him, since he had sent me the billhead. Along with the bookmark came a vintage Christmas postcard which had probably also come to him as a bookmark, so I passed that on to Susan. They should each receive their Thank You Mail Art by January 4th.

Penny & Judy also received Thank You's similar to the one I sent to Forgotten Bookmarks.

I hope everyone has a Blessed and Prosperous New Year.
Posted by MrCachet at 11:53 AM