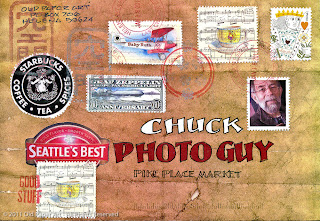 It works both ways, Chuck. This all started about two years ago this Spring when I started doing what I always wanted to do - ART - as a second career. The full story behind the art work included on this piece of mail art is covered in my post in June of 2009 called First Cup Of Fascination. Chuck also covered it pretty well this AM on his blog - One A Day - Mostly Seattle.

I paid a visit to Seattle in late January two years ago to make a trip North into Canada to spend an afternoon with Author and Artist Extraordinaire, Nick Bantock.  How it came to pass that I would spend an afternoon in his studio is a story in itself but not the subject of this post. The subject of this post is an artist with a camera lens who just happens to be my brother-in-law.

One of the first (if not the first) piece of old paper that I acquired was a 'book' of sheet music that contained four pieces of music for the Pianoforte - the forerunner of the Piano. Contained in the book were four songs about Venice, Italy, the first of which was entitled 'Dawn'. I knew that Chuck had made a trip to Italy several years ago and had taken many photographs of Venice. When I asked him if he had any photographs of Venice, he pointed me to his web site so that I could look at what he had available. I found a photograph which I knew would be perfect for a model - a cup of coffee.

As I mentioned earlier, Chuck posted a scan of this piece of mail art this AM on his blog. As a matter of fact, I grabbed the image from his post because this is the first time I've been able to show you  what a piece actually looks like after it's traveled through the mail system.

I also would like to thank Jennie Hinchcliff, one of the co-authors of Good Mail Day for the idea of using an unthreaded sewing machine to create perforations for stamps of my own design.

I'm off next week for another trip to Seattle to: see Chuck and his wife (my sister) and to shop for old paper. And of course, I'll have to sip some coffee from Seattle's Best (AKA Photo Guy) and Starbucks while I'm there. And oh yes - I'll be looking at photographs for models for more mail and Old Paper Art while I'm there.

And please stop by Beth Niquette's The Best Hearts Are Crunchy, view some of the other participants blogs, and thank her for once again hosting Postcard Friendly Friday.
Posted by MrCachet at 5:59 AM