The Western Heritage Art Show was a success for me. It opened  Wednesday  the 16th at 7:00 PM with awards for the Lobby Show in which all sixty-two of us were allowed to enter one piece. I put the Pinned Ball Wizard in the lobby show, and hindsight tells me that I shouldn't second guess jurors, and I won't - next year. It wasn't a piece of Old Paper Art and probably should have been.
The rooms opened at the same time, and after being opened for ten minutes, I'd sold a piece. The same thing happened last year, when I sold a piece that I had included in  my ad in the program. 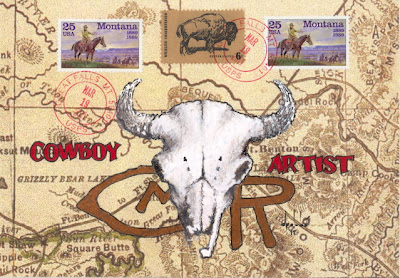 Thursday was just as good, and in fact the piece that I completed for the Quick Finish event  (a piece of mail art) in the evening sold for more than it sold for last year. The gentleman who purchased the piece brought it up to my room after the event and returned it to me. Charlie Russell's birthday was Saturday, and since I got my start by looking at his mail art over fifty years ago, I took it to the Russell Post Office on Saturday morning and had it canceled and then shipped it to its new home in Idaho.
Friday was another successful day in the room with two more pieces selling, and the piece I did for the Paint-Around in the evening sold for more than I thought it would. The event involved working with six other pieces and six other artists, with 10 minutes at the end of an hour to complete (or repair) your piece and frame it.  Below is a photo of me holding the completed piece before it was auctioned. I came in a disguise.
Saturday was a big day for me. Two more pieces sold, but the highlight of the day was a visit from the author Jamie Ford that I posted about on Monday.
With the room open only from eleven until four on Sunday, I still managed to sell one piece. We were tired after being there until 10:00 PM every day, but I was wearing a big smile.
Now for the contest.
The images at the top above are Thank You's for six of the pieces I sold.  I've posted about all of them, but not all of them are recent.  Add a comment to this post naming the titles of the blog posts for which these Thank You's were created. The first one to post the titles (or the dates they were posted) gets a piece of mail art. Happy Hunting! And make certain that you stop by The Best Hearts Are Crunchy where Beth Niquette hosts Postcard Friendly Friday. I'm sure you'll enjoy more postcard eye candy both old and new!
Posted by MrCachet at 10:02 AM