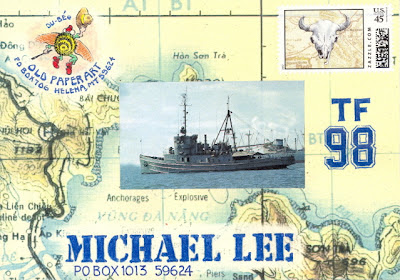 We met, by accident, at the Last Chance (PO) Station here in Helena. He was in Da Nang Harbor in 1969, although I'm not sure just how close we ever came to each other. He was on this Tugboat, and I was at the bridge which crosses the river just to the left of the first character in his first name. Michael sent me the photo that I used on the envelope, and I have to credit a fellow shipmate of his by the name of Bob Chady for taking this (cropped) photograph. Our initial conversation was driven by the fact I was wearing a cap that my son gave me. One of only two outward signs that I'd been to SE Asia, and Vietnam specifically. He opened The Ball by asking.

He takes photographs. He spent several hours over a couple of days taking my photograph for an exhibit of Vietnam veterans which he is putting together. I have not seen it. I won't see it until November, pretty close to Veteran's Day.

He has skills with a camera and Photoshop that I do not have. I owe him a great deal, not only for the portraits, two of which I now have, but for the shared experiences that we can "re-remember" and recreate in the telling.

Thank you, Michael.
Posted by MrCachet at 7:23 PM