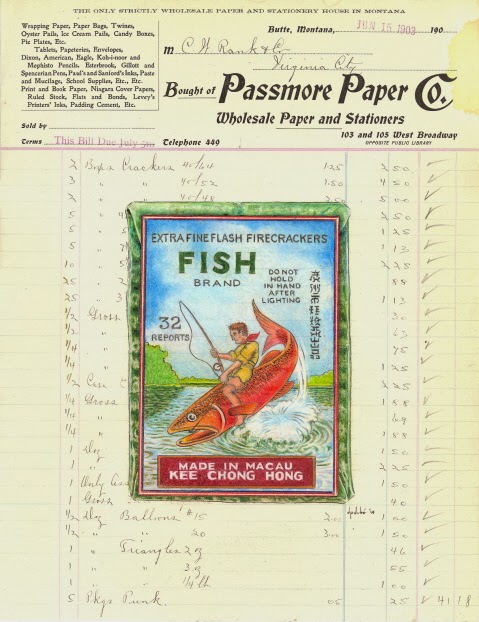 Another order for C. W. Rank & Company in Virginia City, Montana, this one dated June 15, 1903. "This Bill Due July 5th". Which meant that Passmore Paper expected C. W. Rank in Virginia City to pay up after the fireworks went up in smoke. Although Passmore Paper billed itself as "THE ONLY STRICTLY WHOLESALE PAPER AND STATIONERY HOUSE IN MONTANA", there was no paper line items on this billhead. It was all fireworks, but for the 5 packages of punk on the bottom line.

Firecracker labels are actually collectible. Until the turn of the century, most of the firecrackers and fireworks were made in China, but in the early 1900's, India began marketing fireworks as well. I looked at literally thousands of Chinese firecracker labels on the web. I found Cowboys and Indians of all kinds, but only one fish. I hooked this one. I've heard of dynamite fishing and blast fishing, but never firecracker fishing. Now I have.
Posted by MrCachet at 6:51 AM