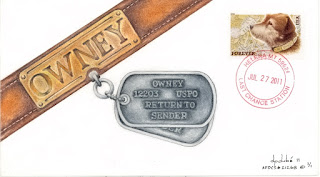 In 2011, the USPS offered a Forever stamp honoring a dog who followed a mail clerk to work in 1888 and became a mascot because it liked the smell of mail bags. He traveled the country in railroad mail cars, always returning to Albany, New York, where he originally hopped aboard.

Along with the release of this stamp, USPS also offered a number of high-tech tidbits to try to get youngsters interested in stamps. They also opened a contest to First Day Cover artists to create covers to be included in an exhibit at the National Postal Museum in Washington, D.C., along with Owney - who is now stuffed and on exhibit.

I forgot about the contest until Monday morning when I was at the post office to mail a package. The postal employee who aided and abetted some of my early adventures with stamps excitedly approached me with some news - Our Postmaster had been to the postal museum in Washington, and she took a photograph of my cover - in the museum exhibit. I thought that was pretty special.