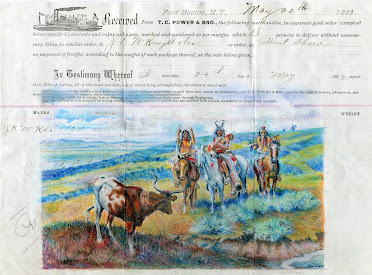 The image is from a C. M. Russell painting executed by him in 1919. The document itself is a bill of lading for a wagon load of goods from T. C. Power & Brother in Fort Benton, Montana Territory, in late May of 1882. I could research which of the boats would have arrived that early from St. Louis, because I have that recorded somewhere. Regardless, the wagon was dispatched to the Indian Trader at Fort Shaw, J. H. McKnight. Included on the wagon was a barrel of whiskey, at least 6 barrels of salt and hardwood lumber. The driver had to sign his name to the document. Partridge. No initial. Mr. Partridge signed, essentially testifying the barrel of whiskey would arrive at Ft. Shaw in the same condition it left Ft. Benton.
The image depicts an escaped young steer from a Bull Team, and the Indians are confused as to the nature of the beast they are looking at. The one on the Left is signing Buffalo...hence the title that Charlie gave to this painting that I've attempted to create in miniature.
Posted by MrCachet at 7:51 AM