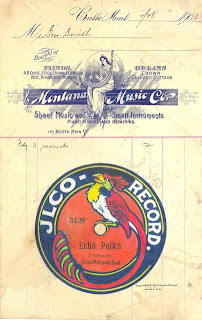 About a week ago, Seth Apter of The Altered Page Blog posted a call for a collaboration of hosts of Art Blogs to repost one or two of their ‘ancient’ posts and then link to his Blog (as I did above) where he would post a list of all the Art Blogs that agreed to participate in his Hunt for Buried Treasure. I decided to go with this piece for more than one reason, but I’ll give you those after I tell the musical tale of Gus Smith, Musical Connoisseur Extraordinaire.

On the 28th of February, 1903, only four short years after the introduction of the phonograph, Mr. Gus Smith walked into the Montana Music Company at 119 North Main Street in Butte, Montana, and purchased three records. What’s really nice about this billhead, as such pieces of ephemera are called, is that this would not normally be a piece of ephemera that I would purchase for the simple reason that it’s just too fancy. The only saving grace was that when I first saw it, it looked like it had spent at least seventy years on the floor, and was so dirty and stained I had to spend a couple of hours cleaning it up before I even dared put a pencil to it.

My first thought was to use ”His Master’s Voice”, which came to the United States via Berliner's disc records. Victor was a partner to Britain's Gramophone Company (of "His Master's Voice" fame) and eventually used the same dog-and-gramophone trade mark. Victor was America's main record company and evolved into RCA. When I thought about how common the little pooch really was, I went looking elsewhere for visual ideas. After looking at thirty or forty labels that predated February of 1903, I decided to settle on a more obscure record label that Gus might have purchased. I found this British label with a colorful and almost Art Deco Parrot on it, and after looking at the title(Echo Polka), I knew I’d found THE label for Gus and the title for this piece all in one fell swoop. So… Gus Wants to Polka ------ Polka came to be.

The other reason for reposting this one is that it just very well may be the very first piece of ‘altered’ old paper that I sell. I entered this and Sody-Licious!!! in the Blackfoot Valley Art Auction to be held August 7th and 8th in Lincoln, Montana. Gus is Lot number 135 on Friday evening, and the Sody-Licious Bottle is Lot number 220 on Saturday evening. The proceeds of this auction are split between the artist and the Parker Medical Clinic in this small town. So, I get some good ink, (hopefully) a good sale and some exposure for some art on old paper that most people have never seen.
Posted by MrCachet at 8:44 PM