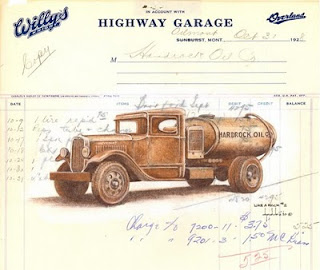 This is the second piece of Highway Garage bill head that I've done with a similar truck depicted. I posted that one back in early July and then donated it to the Marias Museum of History & Art in Shelby, Montana, my hometown. This one is going to go with me to the Western Heritage Artists show the middle of March. I thought that the Highway Garage was in Oilmont, but apparently it was also in Sunburst, since the name has been crossed out at the top of the billhead, and Oilmont is written in. The company for which the service was performed was the Hardrock Oil Company. I have no idea if they ever owned a 1928 Chevy with a tank and auxiliary engine on it, but I used my Artistic License on this one.

I'm going to be working on another piece of territorial (trout) FLY PAPER, which I'll post as soon as I get that one done. It's also going to go with me to the show with as many more new pieces as I can get done between now and the 17th of March.
Posted by MrCachet at 6:20 AM