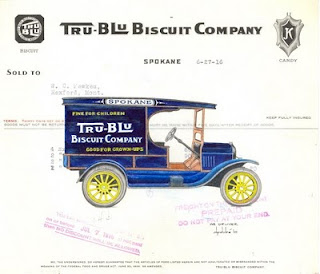 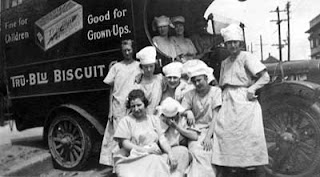 The Tru-Blu Biscuit Company was a local Spokane, Washington company that also sold Krause Candies. I spent many hours looking for some of their packaging, and in the process of searching and making inquiries of historical society sites - found little information about them.

I have in my possession a number of high school 'quarterly' yearbooks from the North Central High School in Spokane, which included advertising for a lot of local businesses, including Tru-Blu Biscuits. I brought these back from Seattle, Washington, and they'd been in the possession of my brother-in-law, Chuck Pefley. Chuck grew up in Spokane, and had more than several boxes of EPHEMERA that had come from the attic of his parents, some of it including some from his grand-parents as well. Chuck allowed me to go through what he had, and to take whatever I wanted. The yearbooks, from 1913 to 1916, are filled with 'good art' and perhaps I'll share some of it in the future, but for now -

I liked the Tru-Blu logo and color scheme. In early Spring my wife and I were on a trip to Havre, Montana to visit her family. We took a tour of Havre Underground, and on that tour I saw a tin about a foot square on one of the General Store shelves, and I took a picture of it. On that very same trip, I made a stop at one of my sources for old paper, and I found more than one piece of Tru-Blu Biscuit Company bill head. Further looking on the web led me to a photograph of employees standing beside a Tru-Blu delivery van. I did my level best to search out more photos of their vehicles, but this was the best I could do. I questioned old truck fans to try to determine from the photograph I had what type of truck it was. I drew blanks. I did the next best thing - I used another delivery van as a model. I wanted to get this piece ready for the Western Heritage Artists show in Great Falls, Montana on the 17th of March. So for now, this is a Tru-Blu delivery van, and that's all there is to it!
Posted by MrCachet at 12:56 PM