Baby Ruth From Above 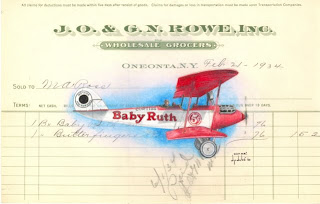 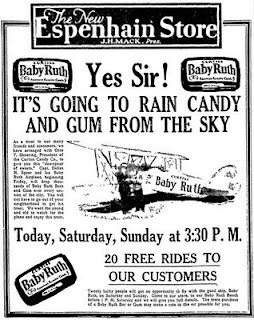 Way back in December, I got a very nice email from Susan E at This Old Paper. Actually, the email was a note telling me that I ought to look at her current post, which I quickly did. It was a HUGE Welcome to Me, combining our mutual fascination with old paper with a fresh idea for some art work on a 'bookmark' of sorts. She provided a link to the Forgotten Bookmarks site, which I had already been following on an almost daily basis. Her suggestion was that it would be really neat if I combined an old ad for Baby Ruth with the old billhead that Michael Popek at Forgotten Bookmarks had found in "The Quarterly Illustrator, Vol. 1 No.4" published in 1893. The line items listed were for one box (120) of Baby Ruth and one box (120) of Butterfinger candy bars. The title for his post on this special find was Someone's Got the Munchies.

To come to the point, I contacted Michael at Forgotten Bookmarks and although I offered to pay for it, he told me he would GIVE me the billhead - and he did.

That was over six months ago. I pulled the piece out of my ever-bulging binder several weeks ago, and although I tried every conceivable layout for the ad that Susan E had suggested, there was just no way I was going to fit that ad on this piece of old paper. So...

I started doing more than just a little research.

But I digress. I started looking for images that could be of use to me for a piece of paper about half the size of a regular piece of letterhead. I've include the image of an advertisement for a store in Milwaukee promoting a Rain of Baby Ruth candy bars. I knew I was close, but the image was just not clean enough to do the paper up right, so I continued looking for Baby Ruth airplanes until I found one I could use. What you see is what you get! My art probably doesn't make you want to go buy a Baby Ruth, but you'll perhaps think of my art the next time you pay 75 cents for a nickel candy bar!
Posted by MrCachet at 7:09 PM