Indian Motocycle and the Logo 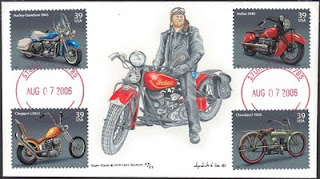 From the Indian Chief Motorcycle site: The original Indian motorcycle company was founded in 1901 in Springfield Massachusetts USA, by bicycle racer George Hendee and Swedish immigrant Oscar Hedstrom. Some people wonder why it was called the Indian Motocycle Company instead of Indian Motorcycle Company. In Italy, all motorcycles have names beginning with "moto" e.g. Moto-Guzzi, Moto-Ducati, Moto-Laverda, so perhaps Hedstrom was familiar with that. The earliest models looked like mopeds (bicycles with small single cylinder engines) and only 3 were made in 1901. Interestingly, Triumph began production the next year (1902) and Harley-Davidson the year after (1903). So the order was Indian, Triumph, Harley. This "Big Three" are still around a century later, while many other brands which started later died off years ago. Indian made 143 motorcycles in 1902.

I have more than one piece of Indian paper, but I intend to put motorcycles on them, much like I did in 2006, when my wife and I made the trip (in our SUV) to Sturgis, South Dakota, for the First Day Ceremony for the Motorcycle stamp issue. I've included the image of the finished cover for the issue, which pictures my brother-in-law, Tom Benson of Shelby, Montana. He restores Indian Motorcycles, and it was a perfect match as far as relevant art work for the stamps.

I know absolutely nothing about Curnow the Indian. I do know for certain that this piece of paper became irrelevant in 1913, when the company was renamed as the Indian Motorcycle Company. It will be interesting to see if there are any images from Butte, Montana, that include Curnow, or any of his customers!
Posted by MrCachet at 8:25 AM