Have (Ostrich) Duster, Will Travel 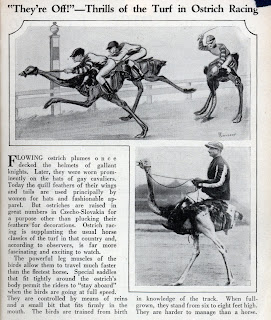 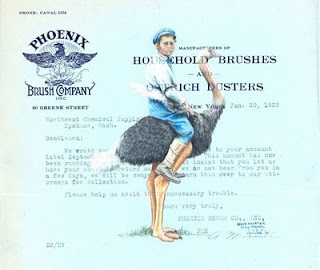 Over the past several months, I've acquired a couple of pieces of billhead which refer to Ostrich feather dusters as either part of the business information in the header or as line items. While I was looking for Ostrich images, I happened upon an image of an Ostrich race. This intrigued me, since I had no idea that an ostrich could be ridden, much less raced. After having found one image, I went looking for more, and found a potential source for the Ostrich Feather Dusters sold by the Phoenix Brush Company, Inc. - the Cawston Ostrich Farm in California. The old linen postcards pictured on this site are almost surreal, and I couldn't pass up using at least one of them as a source for my art work on the Phoenix Brush Company billhead.

A couple of weeks ago, Brian Carlisle from the Paper Sponge put up a post called Bits of Bird Life from an article published in an 1897 issue of the Youth Companion. Fascinating to say the least. If you are interested in ephemera like I am, you really ought to give the Paper Sponge a look. I had no idea Ostrich Farming was such a money-making proposition at the turn of the Century. Brian's article nudged my brain and I decided to tackle the Ostrich while it was still standing still.

The gentleman aboard this male ostrich is apparently well acquainted with the bird, since I see no evidence of saddle or bridle. Perhaps he just waited until the bird stuck his head in the sand as the ostrich is doing in the image above. Later I hope to post another piece depicting a young lady riding one side-saddle.
Posted by MrCachet at 8:15 PM