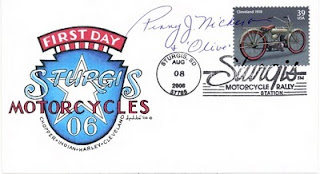 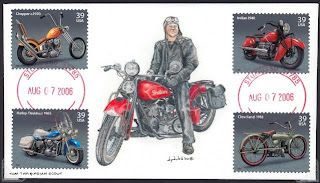 The top image is one of about twenty covers I produced as a printed issue for the Motorcycle stamps which were released during the Sturgis Motorcycle Rally in 2006 in Sturgis, SD. I asked the owners of the four different motorcycles which were depicted on the stamps to autograph the cover with 'their' stamp on it. Although I had intended to sell these to offset the expense of attending the First Day Ceremony and obtaining Unofficial cancels for my hand-drawn and painted issue, I was not allowed to sell them in Sturgis. Penny Nickerson's cycle (which she called 'Olive') is a 1918 Cleveland. She rides it, and has a mechanic who travels with her to make certain that it continues to run as it is supposed to.

The second cover is the hand drawn issue which I did for my subscribers and portrays my brother-in-law on his Indian Scout. I think I've posted this one before, but I wanted to get a post up, even if it isn't Old Paper Art. The reason I was anxious to put something up today is because yesterday a lady by the name of Debbie sent me a great email.

Debbie Overton has a new site called Fresh Approach, and she published a wonderful interview that she did with yours truly. We did the interview several weeks ago. Of the images that are included with the interview, five of them have found new homes. THANK YOU, Debbie!!!