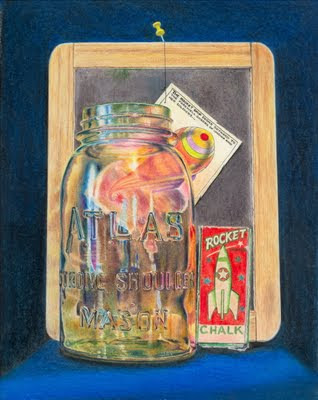 I've been working on this one since the beginning of February. After seeing a painting by Teresa N. Fischer in late February I altered the layout a bit and included the box of Rocket Chalk. Matter of fact, you might want to look at some of the rest of her work because I'm thoroughly hooked on her approach to vintage toys in a big way.

I learned a lot about including something other that a fruit jar, although I'm still stuck on glass. I'm going to tackle some old paper in the coming months as I prepare for a one-man show in Eastern Montana because the focus of that show is OLD PAPER, and specifically it will include some pieces from the area. For now, I'm satisfied with the way this one turned out, and I'm back to working on First Day Covers for a while.
Posted by MrCachet at 8:15 PM