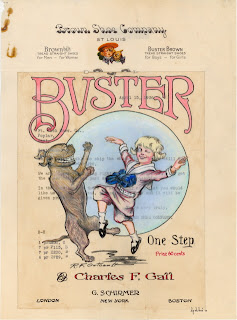 In 1902 successful Sunday Cartoonist Richard Outcault, who developed the comic strip character The Yellow Kid, came up with a new character - his name was Buster, a little rich kid with a pompadour haircut and a (talking) dog named Tige. Bottom line is that Tige is believed to be the first talking animal in the comic strips, and it largely went unnoticed.  Buster had no last name - until 1904. That year at the St. Louis Exposition, Outcault sold the licensing rights to Buster to the Brown Shoe Company. Buster had initially been introduced in Outcault's The Yellow Kid strip, and reaction from fans was one of reasons Buster developed a following of his own.

In June of 2009 I published a post of a piece of letterhead from the Brown Shoe Company upon which I had placed an image of a piece of sheet music for which Richard Outcault had drawn his version of the song title: the Buster One Step That was a letterhead. This is the same image on another piece of Brown Shoe company paper. I have several smaller billheads, but the Buster and Tige images are really popular.

Now if I could only take some decent marble pictures for models, I'd be putting old marbles on old paper!
Posted by MrCachet at 7:42 PM