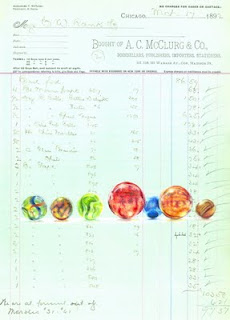 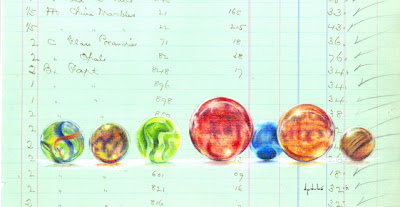 Some explanation is necessary for this piece of old paper.

Let's begin with some information I gleaned from that fabulous resource tool, the web. The following portion is from the Newberry Library in Chicago, and is a synopsis of the business that generated this piece of paper. Although formatted as if it were a ledger, it is actually a billhead that measures eight and one half inches wide by twelve inches high. I have more than one piece of this old paper that contain line items sold by them to C. W. Rank & Company Drug Store and Mercantile in Virginia City, Montana.

Chicago publishing house and wholesaler and retailer of books and merchandise.


A.C. McClurg & Co. traces its origins to Chicago’s oldest book and stationery store which was founded in 1844. The young Alexander C. McClurg went to work for the company, then known as S. C. Griggs, in 1859. McClurg resumed working for Griggs after returning from the Civil War with the rank of general. S.C. Griggs lost all its contents in a fire in 1868. But when the store was completely destroyed by the great Chicago Fire of 1871, Griggs decided to sell his share of the company to E. L. Jansen, A. C. McClurg and F. B. Smith. Jansen, McClurg & Co. was established in 1872. The business flourished and in 1873 published its first title, Landscape Architecture by H. W. S. Cleveland. By 1880 McClurg’s ranked as one of the country’s largest book distributors. In addition to its wholesale book business, McClurg supplied to small-town retailers throughout the West and Midwest a variety of merchandise, including “blank books and tablets, stationery, typewriter paper and supplies, hair and tooth brushes, druggists’ sundries, pocketbooks, pipes, pocket cutlery, etc.”


Although the book distribution component of the company was more successful than its publishing side, General McClurg felt secure enough to start publishing the monthly literary magazine the Dial in 1880 and continued to do so until 1892. It was during this period that George Millard created the rare book section that became known as the “Saints and Sinners Corner.” In 1886 the company changed its name to A.C. McClurg & Co.


When the firm’s premises were destroyed by fire in 1899, General McClurg decided to reorganize as a corporation with shares sold to employees. He died soon thereafter in 1901. Little publishing took place until 1914 when the firm negotiated what turned out to be its most profitable publication, Tarzan of the Apes by Edgar Rice Burroughs. McClurg & Co. went on to publish 10 more Tarzan titles. Eventually Burroughs set up his own company to deal with all iterations of his famous character.


In 1923 A. C. McClurg chose to focus its entire efforts on wholesale work by selling its bookstore located at 218 South Wabash Street in Chicago to Brentano’s. The remainder of the company was finally liquidated in 1962.
Strangely enough, toys (rubber balls, dolls, iron toys, Sad Irons, games, and in this case MARBLES) are not mentioned among the number of items that they provided to C. W. Rank.

I don't believe you can purchase any marbles in this business today, but oddly enough - it's still a going concern. The building was purchased from the original owner in 1889, the year Montana became a state, and it still in business today. For a little more history of the business, you can visit their web site HERE.

When I first decided to put marbles on this piece of paper, I began looking for marble images on the web - by name, since I knew that McClurg would have to have imported the marbles they sold, and most probably from Germany. Although clay marbles were first produced in the United States around 1890, it wasn't until Martin Frederick Christensen of Akron, Ohio, perfected, patented and produced glass marbles by machine. Up to that time, most glass marbles were produced using a long cylinder of hot glass, cut by a metal 'scissors' which had a cup of the proper size as part of the blade for the marble to be produced. The clay marbles as well as the older glass marbles are highly collectible. The Christensen company began producing glass marbles in 1903, and produced them through 1917.

In early May I contacted Joe Street from JoeMarbles about using some of the images on his site for models for this paper. He agreed to allow me to use any of his photographs, provided that I link to his site and send him a link to the finished image. Although I didn't use any of his photographs and finally learned how to outsmart my digital camera, I'm providing the link to his site because you can easily get lost if you're interested in finding some of your own lost marbles. Over the past twenty years or so, I've gathered some marbles that I enjoy looking at while they sit on the window ledge in natural sunlight. Indeed, to me some of them look like little planets. Some of the cobalt blue ones are very old and have been used repeatedly to the point that they look like a cratered moon. Even battered and pitted, they never lose their appeal - at least to me they don't.
Posted by MrCachet at 8:05 PM