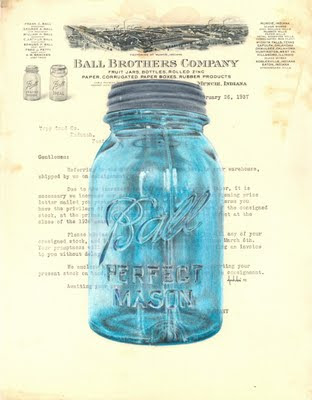 In February of this year I put up a post for a Ball Brothers fruit jar that was amber in color. That piece became the highlight of my room during the Western Heritage Artists show in Great Falls, Montana in March. I sent Thank You notes to Larry Munson who gifted me the paper, and Bruce Schank, who allowed me to use his photograph as a model for the Amber Quart.

A week after sending the Thank You to Larry, I received a manila envelope in the mail that contained several pieces of paper, one of them being the piece that you see here. There's more to the story.

Through further emails with Bruce, I learned that he had a Ball jar that he had obtained from Larry, and consequently he took several photographs of what he called the ODD BALL. I don't know how well I portrayed its oddness, but there are several visual clues that there is something not quite right about this jar, and I think they're worthy of mention.

Quality Control must have been sleeping when this jar was produced. There is a seam line running down the jar, and a huge glob of glass at the base of the seam on the inside of the jar. I tried as best I could to make a Cinderella of a Cinder Girl, and I think I succeeded at least in some small measure.

So a big THANK YOU to both Larry Munson for gifting me the Ball Brothers paper, and to Bruce Schank for sharing Odd Ball photographs with me, allowing me to put a Larry Munson jar on a Larry Munson piece of paper.
Posted by MrCachet at 5:23 AM