The name is Hyatt - I'm Single. 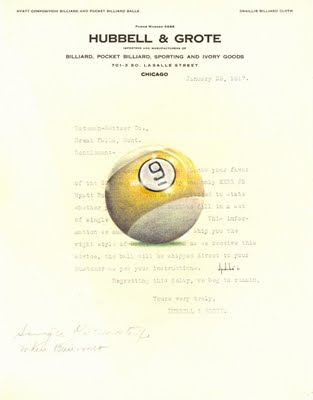 In 1869, John Wesley Hyatt patented the process to turn nitrocellulose and camphor into billiard balls. The process was dangerous and the end product was just as dangerous as the balls were purported to explode on heavy impact.

I can find no information about the company whose letterhead this happens to be, but the most important information is contained at the top - They sold Hyatt composition billiard balls. They also imported IVORY GOODS, which up to the turn of the century would have included pool and billiard balls made of Ivory.
Since acquiring this piece of old paper in March of this year, I've spent countless hours on the web searching for images of a single stripe and double striped number 9 Hyatt composition pool ball with little success. Photographs tend to be too small of the balls in their box, and I simply couldn't locate anybody that had a set of double stripe Hyatts. Those I could locate were pricey - nobody but nobody wanted to sell a single number 9, and I could not afford an entire set. Way out of my league.

I visited the source for the paper (actually, in search of MORE paper), and I mentioned to him that I would like to find someone willing to take a photograph of a number 9 Hyatt, and he drew his breath in and went to the basement of his shop. What he came back with was a box of Hyatt pool balls, including a set of Snooker balls. He entrusted the number 9 to me, so I brought it home with me. Two days ago I visited the local billiard supply store, Paper and Felt Billiard Supply, with the ball and camera in hand, and took photographs of the ball on an antique pool table with green felt. One of the owners, Becky Zapata, turned the lights over the table on, and let me take some photographs.

Armed with the photographs, I came home and proceeded to try various sizes of the ball on my light table to come up with an image that would not only stand on its own, but also reveal enough of the text of the letter to make some sense of what this piece of old paper is all about. I will probably never find another piece of paper quite like this, and I simply couldn't wait to "rack it up."
The contents of the letter itself are interesting. Hubbell & Grote have sent a note to Bateman-Switzer Company of Great Falls, Montana, requesting clarification of their order. --- "...You have neglected to state whether you want the number 9 ball to fill in a set of single or double stripe balls." Could the number 9 ball have exploded? After all, he was single.
Posted by MrCachet at 7:39 AM