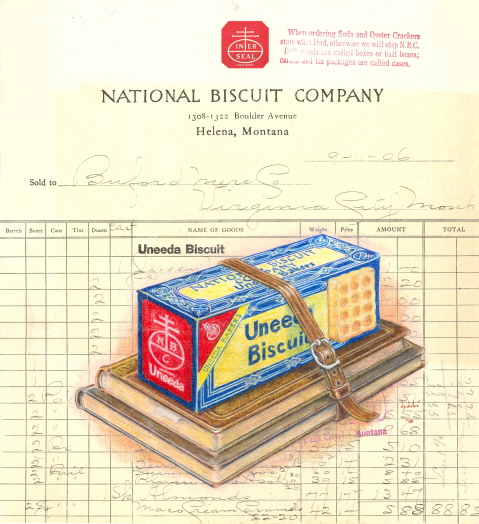 My first OLD PAPER of 2013.
Back in June of 2009, I depicted the Uneeda Biscuit Boy on a piece of National Biscuit Company billhead from the same address as this piece. At the time, I was unconcerned about the underlying printing on the form interfering with my image. That was then - this is now.

I'm beginning to be more picky about what stays and what gets erased. before I start. This one was complicated, but since it is good paper (it even has a NBC watermark) I can reinforce the paper with archival repair tape and still have enough surface left to lay the art work on it where it needs to be.

I've done two pieces of NBC paper with the Uneeda Biscuit boy on them, although the second was on NBC letterhead. This piece of billhead was actually 8 1/2 X 13 inches originally. Business owners would trim the billhead so as to conserve on paper, saving the trimmed portion for other uses.

The piece is dated 9-11-06. All of the baked products, including the Uneeda Biscuits, were produced on site. I've given the history of the building in a previous post with an image of Zu-Zu the clown, who was the advertising icon for another NBC product - Ginger Snaps.

The box itself is the basic image that Frederick Stanley (the artist who painted the original Uneeda Biscuit Boy) had to work with. There is a description of the painting HERE, at Robert Edward Auctions, which also describes the box that he had to create separately and affix to the painting.