Watch Me Soak It. 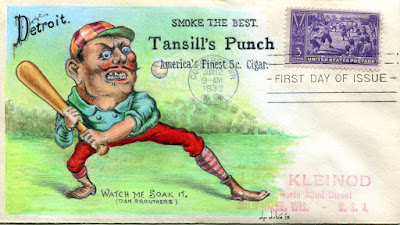 Another commissioned cachet for a long-time patron of mine who happens to collect the first U. S. stamp celebrating the centennial of baseball. I've done a number of these for him, and I've still more to do. This particular image is from a tobacco card using a caricature representation of Hall of Fame power hitter Dan Brouthers. 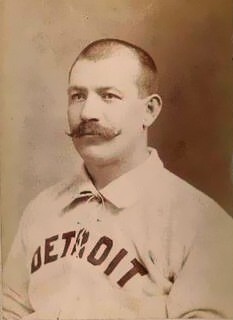 I'm including a photo image I gleaned from the web while I was researching the tobacco card. I discovered that the artist apparently was unaware that Dan batted left his entire career. He dominated 19th-Century baseball by winning 5 batting titles and two home run titles during his career. Some little known facts about the man: He accidentally killed a fellow baseball player while sliding into home plate when he was 19 years old. He was the vice president of the first baseball players union. He briefly held the record for the most career home runs before it was broken by Babe Ruth.
Posted by MrCachet at 6:39 AM