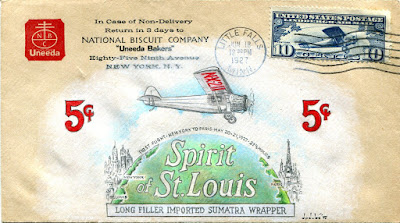 This is a First Day Cover for the 10 Cent Air Mail stamp released to the public four weeks after Charles Lindbergh's flight across the Atlantic. It is believed that although he was offered $1,000 to carry a small package of mail, he declined because of his concern for weight. It is also believed that he did carry a total of five covers, and only two of those have ever come to market.

There was a huge surge in promotions of Lindbergh's name on everything from a dance to cookies, but the National Biscuit Company didn't create a Lindy Snap. This piece is what is called a Corner Card, carrying the name of the business in the upper left hand corner of the envelope serving as a return address. The image is taken from a cigar box label under the company name of Mazer-Cressman of Detroit, Michigan.

Now that this piece is finished, it's flying off to the patron who commissioned it.
Posted by MrCachet at 4:57 AM