"Come and Touch the Wing" 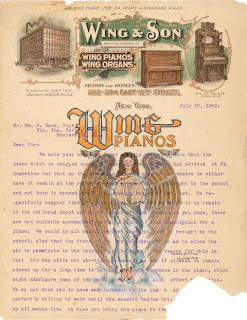 Talk about a forward thinking school! Some time early in July of 1902, the Florida Institute for the Deaf & Blind purchased an upright piano (similar to the piano in the vignette that's second from the right) from Wing & Son in New York. This is the first of two pages of a letter to the Superintendent of the School with instructions on how to deal with the piano in the Florida climate.

Michael Stinnett of The Antique Piano Shop in Atlanta, Georgia, graciously allowed me to use the image that you see on this piece. It comes from an advertising brochure which Wing & Son published around the turn of the Century. I had been looking on the web for some information about Wing & Son after seeing a piece of this letterhead come up for bid on eBay earlier this year, and I stumbled upon the Antique Piano Shop web site and online Museum. I have used it as a resource for several months now. If you have an interest in pianos and their history in this country, this is a site you don't want to pass up.

How does someone hear a piano when they are hearing impaired? As a matter of fact, Kim left a comment asking that very question, so in a reply to her via eMail I also sent the following link: Do the deaf love music?

Come and touch the Wing.
Posted by MrCachet at 6:00 AM