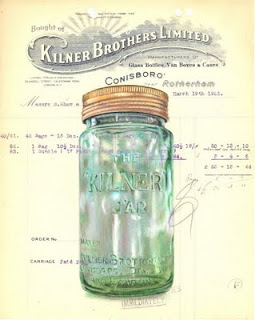 With the help of a long time collector of canning jars, Larry Munson of Devon, Montana, I was able to portray the “Kilner” jar they produced. My last Paper Treasure Hunt and Photo Expedition involved a trip to Larry's for an afternoon of filling my camera with photos of over seventy varieties of fruit jars including the photo I took of the Kilner jar in the previous post that I used as a model for this piece.
Posted by MrCachet at 1:13 PM