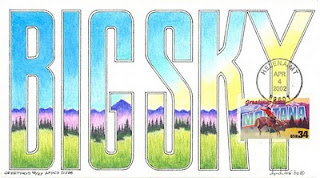 The stamp issue was called Greetings from America, and each state had a ceremony in their capital city on April 4th, 2002. Each stamp was actually meant to look like what were called 'Large Letter' postcards. I have seen a number of different types of these cards, most of them linen and very colorful. Scenes from the city or state which were the subject of the cards were portrayed in each of the large letters across the card.

I took the theme of the background from the stamp and although Montana is seven letters, it was already on the stamp, so I chose to use the nickname for Montana.

Be sure to check out The Best Hearts Are Crunchy for Postcard Friendly Friday hosted by Beth Niquette for more Mail Art Images!
Posted by MrCachet at 8:28 PM