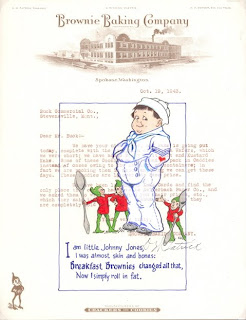 Pillsbury has their doughboy, so I think Breakfast Brownies Cereal can have theirs too!

There is little known about the Breakfast Brownies Company, and not a whole lot more about the Brownie Baking Company, except that they were not one and the same. The Breakfast Brownies Company was incorporated in 1919 in Montana, and although the officers were not all in or from Helena, the cereal was milled in Minneapolis and packaged here in Helena. Just exactly where in Helena I cannot determine, although I do know where their office was located.

I have seen a cardboard case for the cereal, a stock certificate, as well as one sample box and a dozen metal plates for print advertising. One of the plate images is the source for my Brownie Doughboy.

I acquired several pieces of letterhead for the Brownie Baking Company, whose bakery was in Spokane, Washington. I do know that the Brownie Baking Company was once the Tru-Blu Biscuit Company, because I have seen five real photo postcards of the factory, and the message side of the card has the Tru Blu logo printed on it. Research on the web reveals very little about the company, other than the fact the factory bakery building is still in use – not as a bakery, but it's now artist studio space.

I decided to put the Breakfast Brownies Doughboy on this piece of Brownie Baking Company letterhead because they had one thing in common – they both used the images of Brownies to sell their products. Note the Brownie in the lower left corner of their letterhead. I've never done this sort of thing before, but my chances of ever finding a piece of Breakfast Brownies paper are slim and next to none.

Well? Do you think this piece of advertising art would fly up against the Cocoa Puffs of the cereal world?
Posted by MrCachet at 6:06 AM