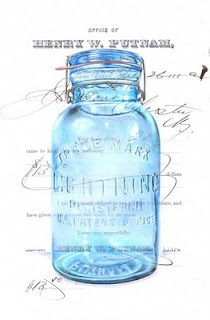 This billhead was purchased on eBay at auction on September 26th. Someone else besides me wanted it, so although they attempted to Snipe it once I had put in a bid, I went back and bumped my maximum bid up to what I thought would be adequate to cover any snipes. Although I have all kinds of paper waiting in my binder to be worked on, I knew I was going to put a fruit jar on it as soon as I saw this piece of paper come up for auction.

From the Pick Your Own website, "In 1882, Henry William Putnam of Bennington, Vermont, invented a fruit jar that used a glass lid and a metal clamp to hold the lid in place. These "Lightning jars" became popular because no metal (which could rust, breaking the seal or contaminating the food) contacted the food and the metal clamps made the lids themselves easier to seal and remove (hence the "Lightning" name) . There were many similar glass lid and wire-clamp jars produced for home canning all the way into the 1960s. Many can still be seen in garage sales, flea markets and on specialty food jars today."

Marianne Dow, a wonderful cyberfriend, has posted at least one article about my glass images, and fruit jars in particular, as the webmaster for the Findlay Antique Bottle Club, in Findlay, Ohio. When I visited Larry Munson of Devon, Montana, over a year ago I took no photographs of Putnam jars. Consequently when it came time to come up with photographs that I could use for reference and as a model, I asked Marianne if she would help me out. And she did - in a very big way.

I think this Lightning fruit jar is my best glass image yet. I would have liked to have portrayed one of the oddly colored Lightning jars as they can be found in a wonderful array of colors, but trying to put yellow or amber glass on a piece of blue paper would have required a lot of preparation work on a piece of paper that I felt needed to be kept the way it came to me. Marianne had a large Putnam Lightning jar in Cornflower Blue, so I chose to use that color as the base color for my jar.

So Marianne, I gave you a Ball jar in July of last year, so this time Lightning strikes for the first time. I hope it strikes again in the future! It's headed to the framers to be matted and framed and put behind archival glass as soon as I'm through posting this article.
Posted by MrCachet at 9:22 AM