To honor them all - through him - Lest we forget. 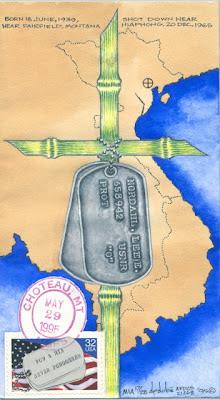 You have seen this First Day Cover before. I posted it HERE in 2009. That Veteran's Day was an anniversary of sorts, but Veteran's Day to all of us none the less. Memorial Day is different. It isn't a day to go to the lake, or enjoy a picnic out of doors. Perhaps it never should be.

Several months ago, I received an email from a gentleman by the name of Nicholas Thrasher. He is the Editor and Art Director for the premier publication of the Naval Aviation Museum Foundation, called aptly Foundation.  The last link will allow you to preview a recent copy of the magazine, but it doesn't happen to be the most recent issue.

Mr. Thrasher had found my envelope doing a Google Search. He was extremely interested in getting in touch with Lee's family for a photograph and and also interested in using my art work within an upcoming article in the Foundation magazine entitled "The loss of Flint River 604". It is the story of the flight and subsequent downing of the RVAH-13 Vigilante aircraft with Lieutenant Commander Guy D. Johnson and Lieutenant JG Lee E. Nordahl aboard. Included in the article are aerial photos of the mission's intended flight path, including the home leg to the U.S.S. Kitty Hawk, photographs of the aircraft itself, as well as photographs of LtC Johnson, and LtJG Nordahl.

Also included in the article (I just recently received complimentary copies of the magazine) is the narrative of how I came to complete my tribute to Lee.

The short story is that Lee's mother was still alive in 1995, and living in Wolf Point, Montana, with Lee's sister. They at the time made an almost 500 mile trip from Wolf Point to Choteau, Montana, for Memorial Day services at the Choteau cemetary. I not only had the envelopes cancelled in Choteau (Lee's hometown), but I was also able to give one of them to Lee's mother.

Until I got in touch with her in 1995, she had not opened Lee's seabag, which had been returned to her after both he and Johnson were declared MIA. She kindly allowed her daughter to photocopy his dogtags so that I could portray them as part of my art work for the POW-MIA stamp issue.

Not a Memorial Day passes without my remembering what Memorial Day really means to me, and what it means to those who hold memories of their fallen heroes. God Rest them all.
Posted by MrCachet at 9:53 AM