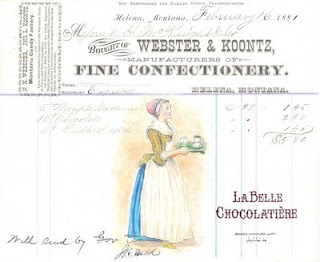 Or ---- Baker's Chocolate Lady to those who are familiar with one of the first commercial advertising images to be used in the United States. But I digress - I'll begin with the paper.

I looked at a lot of paper last week, most of it was local and none of it was later than 1900. That's right - it was all earlier than 1900. The only problem with paper that's this old is coming up with advertising images which are appropriate for the time period.

I only found one piece of Confectionery paper, and it's dated February 16, 1881. Montana was not a state, but Helena had a Candy Factory! I have yet to determine where in Helena the Montana Candy Factory was located, and I also have yet to determine where J. H. McKnight & Company was located, but I do note that whomever the Candy Factory employee was that sold this candy states on the bottom of the bill head that he "Will send by Gov Team". Apparently, it took men with weapons to deliver your candy in 1881!

In 1760, Jean Ettiene Liotard did a pastel entitled "La Belle Chocolatière". Liotard's model for the pastel was Anna Baltauf, the poor (literally) daughter of a Viennese knight and a chocolate server, who later married Austrian Prince Ditrichstein. The Prince fell in love with Anna one day when he chanced to go in a House of Chocolate shoppe. He later married her and had the pastel commissioned.

In 1852, Walter Baker, the man who founded Baker's Chocolate died and left the business in his will to his brother-in-law Sidney B. Williams and a nephew, Henry L. Pierce. Under the management of Williams and Pierce, Walter Baker & Company, grew into a large chocolate business near Dorchester, Massachusetts.

In 1881, while traveling in Europe, Henry Pierce saw the pastel of La Belle Chocolatiere in a gallery in Dresden, Germany. Immediately, he decided to adopt "this chocolate server" as the trademark for Walter Baker's.

I have a number of bill heads from after the turn of the century which list Baker's Chocolate as a line item, and I intend to portray the Baker's Chocolate Lady on more than one of them. This paper was in such good shape that I simply couldn't resist doing this one as a first effort.

I obtained the image for this rendition from Susan E at This Old Paper, and she's getting a Thank You as soon as I'm through posting this.