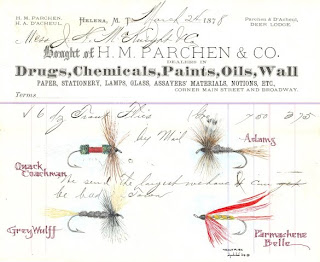 This piece of paper was more fun than I've had in a long time. As some of you may be aware, a couple of weeks ago I went paper shopping - locally. I came away from that little excursion with some pretty fine paper. One of those finds was a bill head for the Montana Candy Company, also known as Webster & Koontz. They were one of the first confectioners in Montana - and I should add here - Montana Territory, for when the paper was dated, Montana was not yet a state.

This piece is also very unique. It also is a piece of territorial paper, and it also was a billhead from the Parchen Drug Company of Helena. I'm certain that there are interior views of this business, and unlike Webster & Koontz, Parchen Drug did publish an address.

The note is of particular interest. It says: "We send the largest we have (the word at is crossed out) can (the word get is crossed out) be had in Town". Apparently J. H. McKnight & Company at Forth Shaw, M.T., had BIG fish in mind...

Fort Shaw was known as the "Queen of the Montana Posts". It sat near the Sun River, about twenty-five miles West of the present city of Great Falls, where the Sun River entered the Missouri. There was an Indian Trading Post there run by J. H. Mcknight, as well as a Saloon. Of course, there was also a regiment of soldiers garrisoned at the Fort. The fort was abandoned in 1890, and an Indian School at Fort Shaw became world famous in 1904. An all-Indian Girls Basketball Team from the school became World Champions at the St. Louis Exposition.

I really am torn about this piece. Part of me wants to keep it for I'll probably never see another piece of paper quite like this - a bill for six dozen trout flies, but - I know there will be other paper just as unique as this one is.
Posted by MrCachet at 10:22 AM