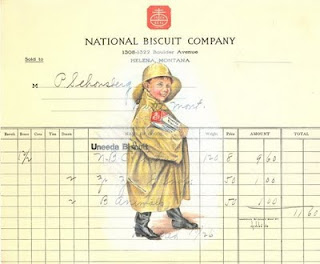 Another fabulous marketing marvel from the folks at Nabisco. Just where did the Biscuit Boy come from? The Uneeda Biscuit was the first use of the In-Er Seal packaging. The In-Er Seal package was a combination of waxed paper and cardboard, guaranteed to get mom's biscuit and cracker purchases home to her even in a driving rainstorm. Before Uneeda Biscuit was introduced by National Biscuit Company in 1898, crackers (and biscuits) were sold unbranded and packed loosely in barrels. Mothers would give their sons a paper bag and ask them to run down to the store and get the bag filled with crackers. National Biscuit Company used this as part of their Uneeda Biscuit advertising symbol which depicts a boy carrying a pack of Uneeda Biscuits in the rain. In 2009 (after over 110 years) Nabisco discontinued the Uneeda biscuit out of concern that the product was not as profitable as other product lines. What a shame. After discovering all there is to know about Uneeda, Ineeda Biscuit. Uneeda was also one of the first product names that used a compound, made up word.

This paper is once again a piece that came from the only biscuit factory in town, and the building, or at least the first two stories, still stands.
Posted by MrCachet at 1:56 PM