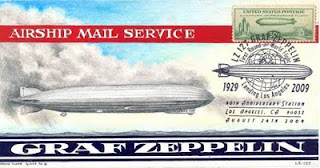 Back in 1990, I was just beginning to follow the Postmark Pursuit column in Linn's Stamp News , a weekly newspaper dedicated to all things stamps or Philately if you want to be proper about it. After my initial exploration with First Day Covers , I started following the Postmark Pursuit column, purchasing stamps that had something to do with the theme of the cancel, creating the art work on the cover, and then sending them off to be canceled. I received many cancels that were not at all what I was expecting, and many that were. I was selling most of those I created through a local gallery and frame shop. The gallery owner would mat and frame them, hang them on the wall, and I developed a group of local people who decorated their walls with my miniature art work.

There were a number of anniversaries celebrated in 1990 of the visit of the Graf Zeppelin to the United States. It was the 60th Anniversary of the issuance of the U.S. stamps depicting the Graf Zeppelin which occurred in April of 1930. Even back in 1990, the famous C13, C14 and C15 stamps were very expensive to acquire, but I went out on a limb and purchased three of the C13 variety. I think I paid somewhere in the neighborhood of $100 for each of them. I had prepared four covers, but I simply couldn't afford to purchase any more of the stamps, so I had one cover that went uncanceled, and as it turns out - what goes around, comes around.

A couple of months ago, there was an announcement in Linn's about two pictorial cancels relating to the Graf Zeppelin flights. I chose the more appropriate looking cancel of the two, had a C18 stamp purchased for myself by a collector, and sent off to have my nineteen year old cover canceled. What you see here is the result of a long wait. It is now on its way to the fellow who purchased the stamp for me.
Posted by MrCachet at 7:43 AM