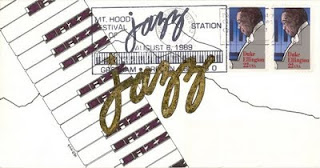 Well, no crocs for me, but since Marie likes snappy things, I thought an old cover (1989) with Duke Ellington for the stamps would be appropriate. Besides, there's a story to go with this one.

I began following the Postmark Pursuit column in Linn's Stamp News shortly after I discovered there was a market for my smallish art. I found this Event Cancel for a Jazz Festival in Gresham, Oregon, called the Mt. Hood Festival of Jazz. I purchased the stamps which were long since off sale from a Stamp Store in Seattle, used the image of the cancel as a starting point, and prepared four covers with Gold Leaf and piano keys in front of an outline of Mt. Hood, just like in the cancel. Being a believer in the Postal Service being able to process my art on envelopes, I sent them off to get canceled.

He finally returned my call to inform me that he'd checked with the employee, and indeed, all of the covers had been processed. I was furious. They had all been labeled with removable labels, and I'd seen none of them return. Until two days later, when the first one showed up. The next day, the other three showed up. All of them canceled with a MACHINE cancel from the Portland Post Office, but different machines.

I called the Gresham Post Office, and let the postmaster know they'd been returned with machine cancels. He was apologetic, but told me that the postal employee would be losing his job, and suspected that when he had been confronted with the case of the missing covers, he panicked and made the drive to Portland to drop them in drop boxes.

So - I ended up with four covers that pretty much look just like this one. There's some wear on the gold leaf in several pieces, but I hold on to them as a reminder not to trust my art to the vagaries of the mail any more.
Posted by MrCachet at 2:41 PM